GEAY REPEATS, WANJIRU WINS HER FIRST AT THE 43RD BLOOMSDAY

Spokane, Washington—Last year Ethiopians had their way over the 12-kilometer course, as they went one-two in both the men's and women's divisions of the Lilac Bloomsday Run. But this year Kenya was back in the forefront, as Rosemary Wanjiru led four other Kenyans to the line in the women's race, while it took some determined running by Tanzania's Gabriel Geay to foil a similar sweep in the men's division. Geay, who notched his second Bloomsday victory in three tries, was chased to the line by five Kenyan men. 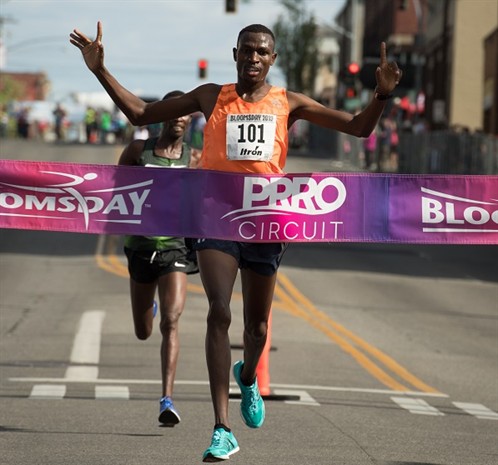 The field of 38,541 "Bloomies" who signed up for this year's Lilac Bloomsday Run started under partially cloudy skies and a pleasant temperature of 57 degrees. Those conditions seemed to be to Wanjiru's liking, as she sped quickly into the lead with a 5:11 first mile. Iveen Chepkemoi, Vicoty Chepngeno and Monicah Ngige hung gamely a few meters back on the first downhill, but as the pack of four started up Hangman Hill at 1-1/2 miles, Wanjiru pushed the pace again, and by mile two she and Chepngeno had a 20-meter lead over the other two.

"I just looked around and I decided myself, let me take it," Wanjiru related later. "And that's why I decided to go all the way." 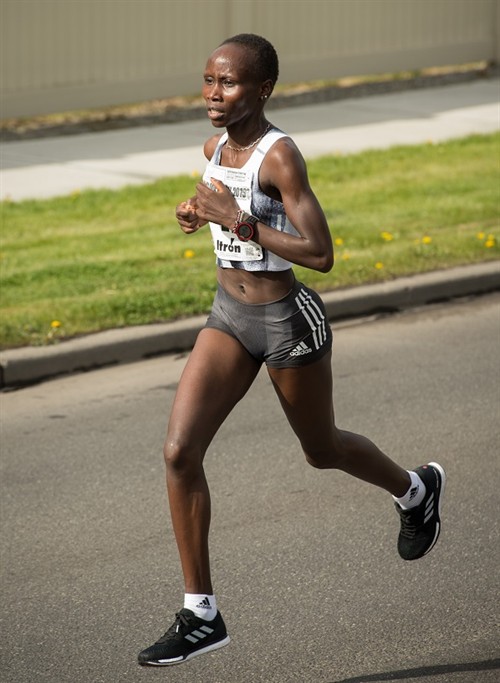 Indeed she did, as by mile four she had taken a 20-meter lead, a gap she built on going up Doomsday Hill. By the five mile mark at the top, she led Chepngeno by 50 meters, and by the sixth mile her lead was 100 meters. Wanjiru passed the 10-kilometer mark at 32:41, continuing her front running all the way down Broadway and on to a finish in 39:06. Chepngeno finished 30 seconds back, while Monicah Ngige held on for third, followed by Chepkemoi and Jane Kibii. Pre-race favorite Buze Diriba wasn't able to mount a challenge this year, as she finished sixth, just a second ahead of top American Maggie Montoya of Boulder, Colorado.

The men's race featured a turn of events rarely seen at Bloomsday. A large pack stayed together through early miles of 4:34, 4:34 and 4:49, but just after mile three Benard Ngeno surged and gapped the field. By the base of Doomsday Hill Ngeno had a 40-meter lead that he continued to hold to the top as he passed the five mile mark.

Having that kind of lead at the top of Doomsday has almost always resulted in here, but Ngeno was perhaps signaling a weakness as he kept looking back at the trailing pack, where Geay had been cruising for most of the race. Weakness or not, the 2017 Bloomsday champion was about to turn the tables. Ngeno's lead continued to dwindle, and by the 10-kilometer mark Geay drew even.

Ngeno wasn't giving up, though, and a two-man battle ensued down Broadway past the seven-mile point. With about 400 meters to go Geay created a small gap, then as the duo made the final turn onto Monroe, Geay put the hammer down, sprinting to a 34:50, one-second victory over Ngeno. Those two were followed by Kenyans Edwin Mokua, Edwin Kibichiy, Dominic Korir and Stephen Sambu, with top American Colin Bennie of Charlottesville, NC finishing 7th.

"I'm so happy and so proud to be here," said Geay. "I like Bloomsday so much, and I hope to be here next year and to win again."

In the men's wheelchair race, Aaron Pike of Urbana, Illinois, decided two times as a runnerup were enough, and he grabbed the lead coming out of the gate and was never seriously challenged, finishing almost two minutes ahead of Krige Schabort. The two clocked 27:34 and 29:35, but the most amazing performance of the day came from Susannah Scaroni, whose 29:58 was the third fastest time of all wheelchair racers and a new course record, surpassing Tatyana McFadden's 30:42 set in 2015. 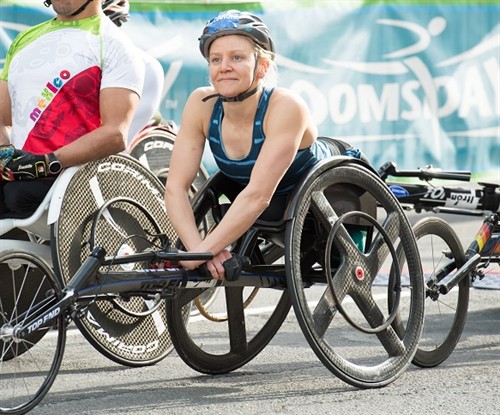 Along with top competition in all Bloomsday divisions, the 35,233 finishers enjoyed performances from over 30 bands, vocalists, performing troupes and radio stations along the course, eventually reaching the finish and claiming this year’s finisher T-shirt. Next year’s Lilac Bloomsday Run, the 44th, will be on Sunday, May 3rd, 2020.