IT'S AN ETHIOPIAN BLOOMSDAY AS JEMAL YIMER SURGES TO VICTORY

Buze Diriba Outleans Mamitu Daska in a Near Repeat of 2017

Spokane, Washington—It was not Kenya, but that other East African nation that dominated the front end of the forty-second annual Lilac Bloomsday Run, the third stop on the PRRO Circuit of major US road races. Ethiopian stars Jemal Yimer and Teshome Mekonen captured the top two spots in the men's race, while Buze Diriba and Mamitu Daska, after battling throughout the 12-kilometer course, settled the women's race as they did last year, on the homestretch, thus notching a similar one-two Ethiopian finish for the women.

The field of 41,699 "Bloomies" who signed up for this year's Lilac Bloomsday Run were treated to cloudless skies and temperatures at the start near 60 degrees. Biruktayit Degefa of Ethiopia used the pleasant conditions to spring to a quick 5:11 first mile and a 10-meter lead. Iveen Chepkemoi grabbed the lead with a 5:15 second mile, but it wasn't to last. The pack stayed mostly together up Cemetery Hill shortly after that, with a couple dropping off during the mostly uphill mile of 5:33.

Turning onto Fort George Wright just past 5 kilometers, Mamitu Daska made a tentative move, but the group quickly covered it, and eleven stayed together during a quick 5:23 mile. American Emma Bates took the lead at the base of Doomsday Hill, but she soon faded as Daska made her first real move, a decisive surge up the hill. In spite of the climb, Daska recorded a quick 5:34 mile and a split of 26:58 at five miles, only a few seconds shy of course record pace. It was a bold move, but Buze Diriba stayed right behind her, with Aselefech Mergia of Kenya and Margaret Muriuki of Ethiopia close behind.

Daska's 5:05 sixth mile was clearly meant to break Diriba's will, but Diriba held on gamely to the veteran's surge. That grouping, with Daska pushing the pace, Diriba hanging on, and Mergia and Muriuki only slightly off the pace, continued down Broadway past the seven mile point, that mile run in 5:08. Diriba moved to Daska's shoulder and stayed there even after the duo turned onto Monroe for the final 300 meters. Finally, with 50 meters to go, Diriba uncorked a final burst of speed that edged her slightly ahead at the tape. Both women were given a time of 39:27, with Muriuki third in 39:31, and Mergia fourth in 39:37. Emma Bates took the top American spot in ninth. 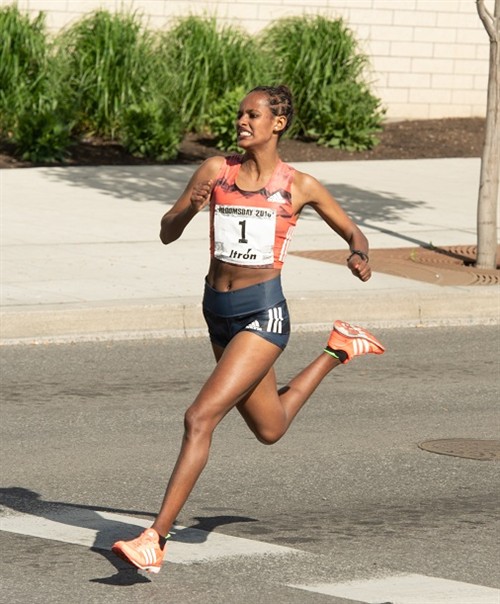 "The course is good, and I think the racing was very tough," said a clearly elated Diriba. "So I'm very happy."

The men's race featured one of the strongest, deepest fields in Bloomsday history, but for much of the race it seemed that no one was interested in taking the lead. Bernard Ngeno had the edge at the first mile (4:31), but he had nearly twenty of his closest friends right behind. Philemon Cheboi took over through miles two and three, but the pace slowed to 4:45, and few dropped from the pack. At mile four it was Wilson Kibogo of Kenya at the front, but the pack was still a hefty sixteen runners as they cruised at 4:45 pace.

Shortly after mile four and a sharp downhill came the infamous Doomsday Hill, which over the decades has been known to whittle many a large pack into a handful of true contenders, and this year was no exception. As the group reached the top of the hill and the five-mile mark, the pack had been cut almost in half. The five mile split of 23:19 was the slowest in Bloomsday history, but the dawdling was about to end.

A quarter mile after the top Yimer ratcheted up the speed, and at the turn onto Mission only three runners were able to match his surge. Even that group began to break up shortly after, and by mile six, run in 4:32, Yimer had a commanding lead. What had promised to be a slow Bloomsday time quickly became credible, as Yimer continued to accelerate to a final time of 34:18, 16 seconds ahead of his countryman Mekonen. It was the second year in a row that the race was won by a Bloomsday novice. Yimer and Mekonen were followed to the line by Kenyans Philemon Cheboi and Wilson Kibogo, with top American Emmanual Bor in fifth. Last year's winner, Gabriel Geay, languished back in thirteenth. 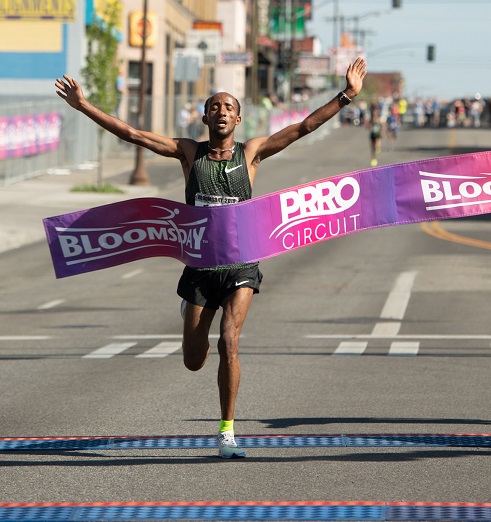 Yimer and Diriba each earned $7,000 for their wins, part of a purse of nearly $100,000 in all divisions of the race. Along with the prize money, both earned the right to compete for the PRRO Super Bonus of $10,000 at the PRRO Championship at Bloomsday next spring. Bor and Emma Bates each took home Bloomsday's top U.S. citizen prize of $5,000, plus open prize money. Francis Maundu of Kenya and Jen Rhines of San Diego each earned the top masters prize of $1,500.

In the men's wheelchair race, 2017 runnerup Daniel Romanchuk of Urbana, Illinois, was challenged early by Aaron Pike, also of Urbana, but the challenge quickly faded. First on Cemetery Hill and later on Doomsday, the 19-year-old Romanchuk used his hill climbing prowess to create a gap that would grow to two minutes by the finish. His time of 26:04 was three minutes faster than his runnerup time last year.

"I've been trying to work my way up for a few years," said the rapidly improving Romanchuk. "So this was a great experience.

In the women's race, wheelchair superstar Tatyana McFadden broke away early from Chelsea McClammer of Benton City, Washington, and used the rest of the race to hone her racing skills.

"The course is challenging, and it helps me to work on a lot of things," said McFadden. "It 's really good to do this course."

Isaiah Rigo of Cheney, Washington, scored a convincing win in the Quad-52 Division in 33:16, while Ernesto Fonseca of Murrieta, California, captured the Quad-51 Division in 1:27:48.

Along with top competition in all Bloomsday divisions, the 38,187 finishers enjoyed performances from over 30 bands, vocalists, performing troupes and radio stations along the course, eventually reaching the finish and claiming this year’s finisher T-shirt. Next year’s Lilac Bloomsday Run, the 43rd, will be on Sunday, May 5th, 2019.