Spokane, Washington—The Bloomsday course is famous for rewarding experience, but today a relative unknown from Tanzania, Gabriel Geay, surprised a pack of Bloomsday veterans by hanging with the crowd through seven miles and then surging to victory in the forty-first annual Lilac Bloomsday Run, the third stop on the PRRO Circuit of major US road races. The women's race, on the other hand, lived up to expectations as Ethiopians Buze Diriba and Mamitu Daska made it a two-woman battle down the homestretch, with rising star Diriba emerging as the winner by two seconds. 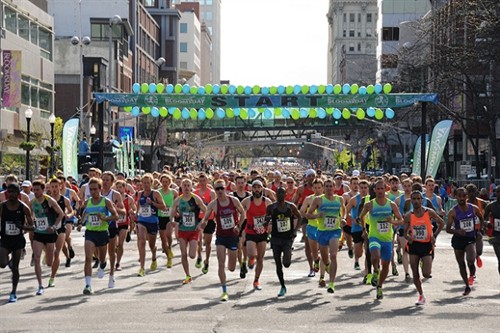 The field of 42,985 who signed up for this year's Bloomsday awoke to rainy skies, but a beautiful blue sky blossomed as the first racers broke from the start, and conditions were perfect, with temperatures in the low-40s and just a hint of wind. In spite of the favorable weather, a pack of 30 women strolled through the first mile in 5:44, one of the slowest starts in Bloomsday history, with Karolina Nadolska of Poland in front. The pace heated up in the second mile, with eleven women still together at the top of Hangman Hill following a 5:25 second mile.

Nadolska and Lineth Chepkurui led the group of eleven up Cemetery Hill to the three-mile point, with pre-race favorites Diriba and Daska tucked in the pack. Eight runners were still in contention as they passed the fourth mile in 22:01, and they were still together at the base of Doomsday Hill, just past 4-1/2 miles. That was when the veteran Daska took control and pushed the pace on the ascent. A quick fifth mile of 5:18 and the tough incline began to whittle the crowd, and by mile six only four—Daska, Diriba, Nadolska and Kenyan Risper Gesabwa—were still in the hunt. Shortly after that Gesabwa fell back, and it was a three-person race to the finish. Daska and Diriba alternated at the front, and eventually it would be just those two. In the final 300-meter sprint downhill to the finish, the younger Diriba proved to have a little more left, as she sprinted home in 40:19, two seconds ahead of Daska. Nadolska finished eight seconds after Daska in 40:29. 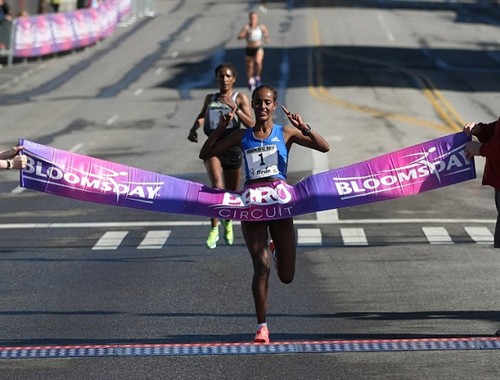 In the men's race, defending champion Philip Langat was in good position in a tight pack of about 15 through a first mile of 4:39. By the top of Cemetery Hill near the three-mile point, the leaders had thinned to seven with Langat pushing hard at the front along with experienced Bloomsday racers Philemon Cheboi, MacDonard Ondara and Teshome Mekonen. Meanwhile Gabriel Geay, an elite field addition only six days prior to Bloomsday and two days after running a 5,000 on the track in 13:20.35, huddled in among the veterans. By mile four, that same pack of seven had gapped the next runner by 40 meters.

At the base of Doomsday Hill just past 4-1/2 miles, Langat made a move and tried to separate, but the pack stayed with him in spite of the quick 4:33 fifth mile. Langat's move backfired, and by mile 5-1/2 he had fallen off the leaders, leaving Cheboi, Mekonen, Geay and Geoffrey Bundi to battle over the final two miles. That group passed 10 kilometers in 29:02, and shortly after that Cheboi, who was third here a year ago, surged. Only Geay responded, and those two raced next to each other down the rest of Broadway and into the final turn toward the finish line. Geay then surged easily past Cheboi and across the line in 34:31, three seconds ahead of the Kenyan. Geoffrey Bundi came home eight seconds later, followed by Mekonen and Langat. 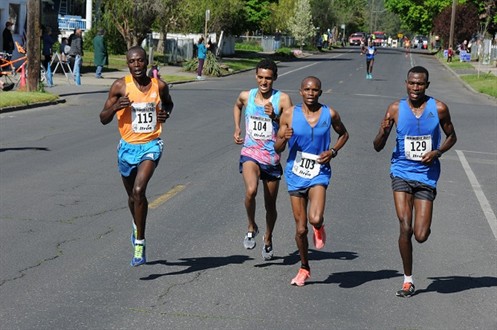 "The course is very good and I felt strong," said Geay. "But if you're not training good, the course is really hard."

Geay and Diriba each earned $7,000 for their wins, part of a purse of nearly $100,000 in all divisions of the race. Along with the prize money, both earned the right to compete for the PRRO Super Bonus of $10,000 at the PRRO Championship presented by the EQT Pittsburgh 10 Miler on November 5. Josphat Kiptanui Too and Belainesh Gebre each took home Bloomsday's top U.S. citizen prize of $5,000, plus open prize money. Neville Davey of Palo Alto, California, and Jen Rhines of Boston, each earned the top masters prize of $1,500.

In the men's wheelchair race, defending champion James Senbeta of Savoy, Illinois, came off the start line in dominating fashion, but took the first corner at the base of Hangman Hill too aggressively and wiped out. That left 2014 and 2015 Bloomsday champion Josh George and 18-year-old Dan Romanchuk of Mount Airy, Maryland to vie for the win. Those two traded the lead for the rest of the race, although George conserved energy much of the way by drafting behind Romanchuk. That proved to be an effective strategy, as George nudged his rival at the line, with both recording a time of 29:04. 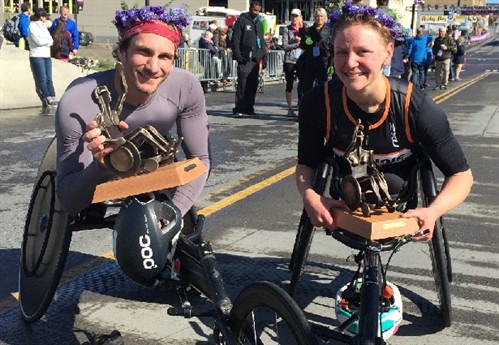 Susannah Scaroni, formerly of Tekoa, Washington, and now living in Urbana, Illinois, won an uncontested race in 32:40, over six minutes ahead of runnerup Arielle Rausin. Ray Martin took advantage of the retirement of the long-time Bloomsday champion Santiago Sanz by notching a victory in the Quad-52 Division, and Jeremy Finton of Canal Winchester, Ohio, captured the Quad-51 Division in 1:12:36.

Along with top competition in all Bloomsday divisions, the 38,748 finishers enjoyed performances from over 30 bands, vocalists, performing troupes and radio stations along the course, eventually reaching the finish and claiming this year’s finisher T-shirt. Next year’s Lilac Bloomsday Run, the 42nd, will be on Sunday, May 6th, 2018.