PERK UP WITH BLOOMSDAY BLEND COFFEE

April 7, 2017—Bloomsday is breaking new ground(s) this year in offering a specialty coffee for purchase before, during and after race weekend. “Bloomsday Blend” was developed by local producer Roast House Coffee after a tasting party with Bloomsday organizers, and the result is now for sale through the Roast House website and at the Roast House warehouse at 423 E. Cleveland Ave. The Bloomsday Blend image on the Bloomsday home page also links to purchase information. 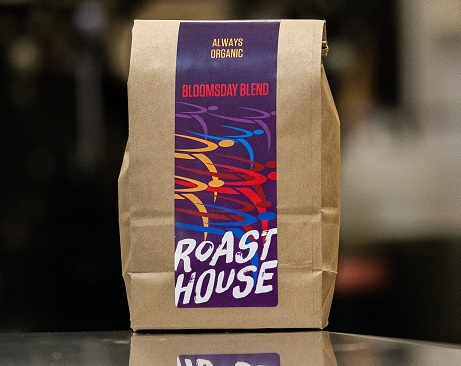 “For many of us, the Lilac Bloomsday Run is a kind of anchor for the year,” said Roast House owner Deborah Di Bernardo. “It’s a motivation to train, a marker of the sweet turn from spring towards summer, a chance to tour the city at a leisurely (or gut-busting) pace. Bloomsday celebrates the spirit of Spokane, and we are happy to now celebrate and support Bloomsday with their own custom blend.”

Roast House worked closely with the Bloomsday crew to formulate the perfect companion coffee— one with familiar, comforting, satisfying flavors ( the chocolatey notes of the best South American beans) but a dash of exquisite fruit tones (from high quality Ethiopian offerings).

“Bloomsday champions have come from two of the three countries whose beans are included in Bloomsday Blend,” said Bloomsday Race Director Don Kardong. “That’s not why they’re in the mix, but it’s a fun connection between the event and a very tasty coffee.”

Bloomsday Blend is for the everyday runner, the first time walker, and the elite athlete who will wow us all with their speed and grace. Or for brunch with the friends with whom you plan to spend that glorious first Sunday in May. Or for a little pick-me-up, mid-afternoon, because, well, you just want it.

“The first sip delivers a caramel-like body and aroma with a pronounced sweetness that enhances notes of cocoa, cream and cherry,” says Di Bernardo. “Softly lingering chocolate notes make this one you’ll want to brew by the pot.”

All proceeds (beyond Roast House production costs) from Bloomsday Blend go directly to Bloomsday. Orders will be fulfilled daily, ensuring customers get only the freshest, best, organic beans.

Coffee drinkers and non-coffee drinkers who haven’t already signed up for the 41st Bloomsday have until April 18th to mail in an entry, or until April 23rd to enter online for the low $18.00 fee. The grind up Doomsday Hill is included for all who enter, as is the stirring finish above Spokane falls.