2016 POSTER AND POSTER HISTORY ON DISPLAY AT DOWNTOWN LIBRARY

April 6, 2016—The history of Bloomsday is now on display at the downtown Spokane library in an exhibit of nearly 40 official Bloomsday posters. The display includes the 2016 poster, which is a finish line photo made from a collage of materials from the first 40 years of Bloomsday.

The 2016 poster is the creation of Steve Merryman of Sigma Advertising, who creates most of the ads and printed materials for Bloomsday. The poster started out as a 2015 finish line photo, showing two smiling young finishers, that Merryman took himself. According to Merryman, “This photo stood out to me because it exemplified what Bloomsday means. It embodies the event.”

The idea of a collage was proposed to and accepted by the Bloomsday board last summer, after which Merryman got to work. Wanting to pay tribute to all the artists who have contributed to Bloomsday over the last 40 years, he worked photos of the original artwork into small shapes, narrowing the pieces down to mostly triangles. 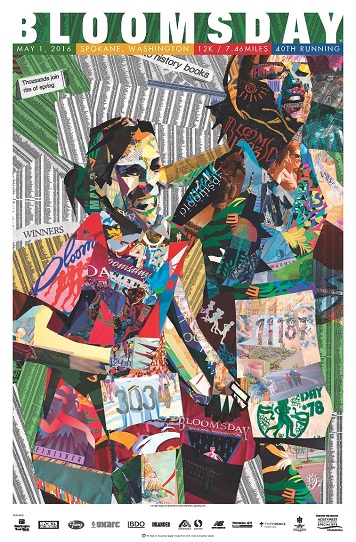 “My first goal was to have a dynamic poster, the second was to use as many pieces of the past as possible, trying to use something from every year,” said Merryman.

The poster was created digitally with pieces of past photos, race results, posters, marketing materials, finisher and volunteer shirts, and race numbers. It took 48 hours for Merryman to complete the 40th year poster, working in two-hour segments (to avoid going cross-eyed).

With this poster added to the others at the library, the display now spans the entire history of Bloomsday, showcasing a variety of artwork and photography that has been used to commemorate the event. The exhibit will be on display throughout April and May at the Downtown Library, 906 W. Main Avenue, on the 3rd floor. This exhibit is free. For more information on the exhibit, contact Jason Johnson, 509.444.5334, jjohnson@spokanelibrary.org or Sarah Bain, 509.444.5318, sbain@spokanelibrary.org.

Those wishing to enter this year’s Bloomsday can sign up online at www.bloomsdayrun.org, or fill out and mail in a printed entry form. Entry forms are available at numerous locations throughout the Inland Northwest. Mailed entries must be postmarked by April 12th to take advantage of the low $18.00 entry fee, while online entrants will have until April 17th. In addition, participants can sign up at Sports Authority stores in Spokane and Coeur d’Alene from now until the entry deadline of April 12th.

This year’s Bloomsday, the 40th, is scheduled for Sunday, May 1. 50,000 runners, joggers and walkers are expected to participate.