December 9, 2016—For the seventh year in a row, a top high school runner from Spokane will be competing at the Foot Locker National Cross Country Championships, to be held Saturday at Balboa Park in San Diego. In fact, this year three Spokane area runners—Kearan Nelson of Central Valley, Katie Thronson of Lewis & Clark, and Amir Ado of Ferris—will be competing at the National Meet, as all three finished in the top ten at the Foot Locker West Regional Cross Country Championships last Saturday at Mt. San Antonio College (Mt. SAC) in southern California. 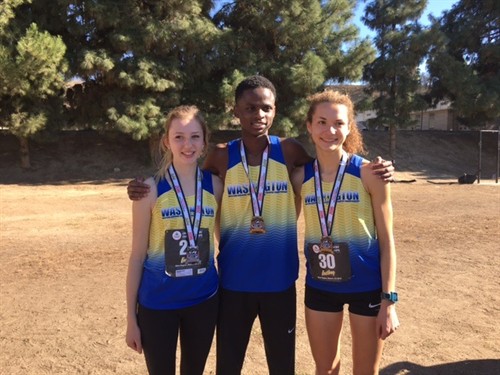 This will be the first trip to Foot Locker Nationals for all three runners. Nelson and Thronson finished second and tenth in the Girls Seeded Race at last weekend’s West Regional Meet, and Ado was third in the Boys Seeded Race. No Spokane runner has ever won the Foot Locker Nationals, which have been held annually since 1979, but John Dressel of Mt. Spokane finished second in 2013. That finish tied the top finish by any Washington runner by Andrew Maris of White River High School (Buckley), who was runnerup in 1989. The best finish by a Spokane girl has been fourth on two occasions—in 1989 by Sarah Schwald of Mead, and in 2005 by Megan O’Reilly of Mt. Spokane.

The West Regional meet where the three runners qualified last weekend was one of four Foot Locker competitions held across the country. The top ten runners from each of four regional meets advance to the National Championships.