Spokane, WA—April 3, 2015—The history of Bloomsday is now on display at the downtown Spokane library in an exhibit of nearly 40 official Bloomsday posters. The display includes the 2015 poster, which shows an aerial view of runners crossing the finish line and milling across the Monroe Street Bridge. The image includes a "hidden" runner, which has been a feature of Bloomsday posters since 2011. The poster display spans the entire history of the race, showcasing a variety of artwork and photography that has been used to commemorate the event. 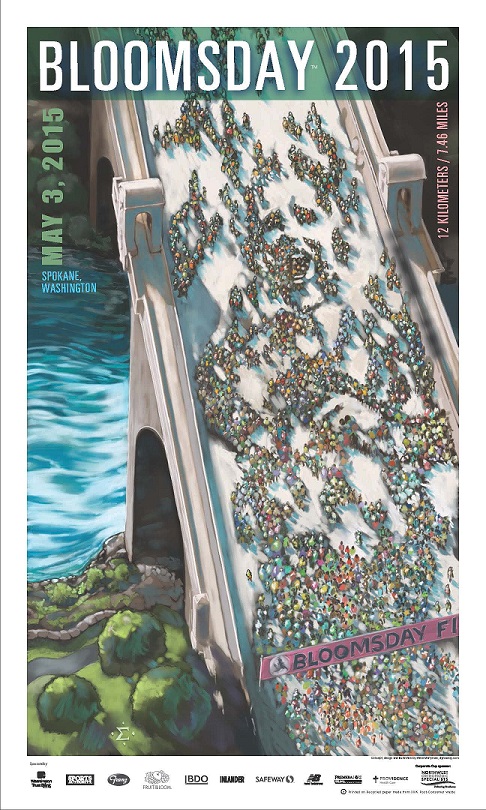 The “hidden runner” posters have been designed by Steve Merryman of Sigma, the company that produces most of the ads and printed materials for Bloomsday. The previous four posters in the series featured the Starting Line, Doomsday Hill, Cemetery Hill, and the Courthouse on Broadway. All posters in the series show streets filled with runners, but a careful eye can also discern a runner as large as the poster, created by the pattern of runners in the street.

Those wishing to enter this year’s Bloomsday can sign up online at www.bloomsdayrun.org, or fill out and mail in a printed entry form. Entry forms are available at numerous locations throughout the Inland Northwest. Mailed entries must be postmarked by April 14th to take advantage of the low $18.00 entry fee, while online entrants will have until April 19th. In addition, participants can sign up at Sports Authority stores in Spokane and Coeur d’Alene from now until the entry deadline of April 14th.

This year’s Bloomsday, the 39th, is scheduled for Sunday, May 3. 50,000 runners, joggers and walkers are expected to participate.