May 4, 2014—Last year a pair of Ethiopians—Belete Assefa and Buzunesh Deba—captured the men's and women's crowns at the Lilac Bloomsday Run, marking the first time in history that the champions both hailed from that east African county. This year, though, it was that other east African powerhouse showing up in force, as Kenyans led a sweep of both divisions, Allan Kiprono returning to the victor's stand after a one-year absence, and  Mary Wacera notching her first Bloomsday win.


A field of 49,094 signed up for this year's Bloomsday, the number reduced somewhat by chilly conditions in the days leading up to race day, as well as a forecast of thunderstorms for during the race. The storms arrived all right, but several hours ahead of time, and conditions for the women's elite start at 8:45 were dry, although with a breezy headwind for sections of the race. Those winds led to a slow first mile of 5:27, with a large pack huddled together down the first hill. As the pack reached the bottom and began up the first uphill at mile 1-1/2, three-time champion Lineth Chepkurui (2008-2010) came to the front and began pushing the pace.


It looked like it was going to be win number four for Chepkurui, but Wacera had a different thought. A half mile later Wacera had caught back up and moved into the lead. Those two continued to battle all the way down Broadway, but as they made the final turn toward the finish with 200 meters to go, Wacera unleashed a fierce kick and surged into the lead, crossing the line two seconds ahead of Chepkurui. 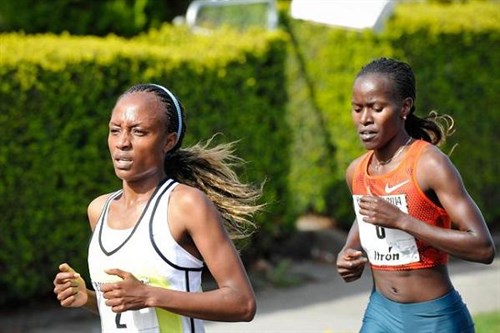 
In the men's competition, a late scratch by pre-race favorite Ethiopian Mosinet Geremew due to illness made it anyone's race to win. A much smaller pack than in the women's race emerged early, as Kenyans Cleophas Ngetich, Allan Kiprono and Kevin Kochei had a firm grip on the lead by the three-mile mark at the top of Cemetery Hill. On the turn onto Fort George Wright at 3-1/2 miles, Ngetich lost contact, and Kiprono began to assert himself. Kiprono and Kochei were running stride for stride, with the duo matching Micah Kogo's course record pace through four miles.


As they reached the base of Doomsday Hill they were still together, but heading up Kiprono surged. At the top he had a lead of 30 meters, and he continued to build on that margin all the way to the finish, clocking 34:11, almost 30 second ahead of Kochei, with Ngetich two seconds behind that. American Aaron Braun ran a solid 35:11 for fourth, followed by Kenyans Stephen Muange and Simon Ndirangu, with American Shadrack Biwott in seventh. 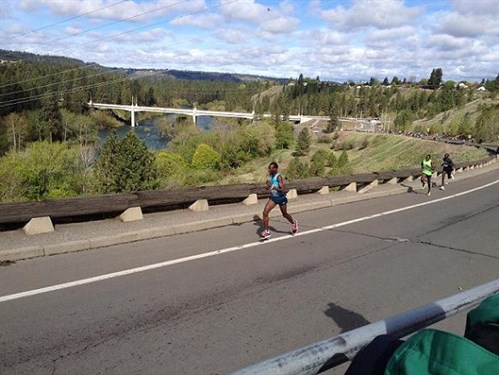 "My focus was only on the road," said Kiprono when asked about the breezy conditions. "I never felt the wind.


Kiprono and Wacera each earned $7,000 for their wins, part of a purse of nearly $100,000 in all divisions of the race. Along with the prize money, both earned the right to compete for the PRRO Circuit Bonus of $15,000 at the Utica Boilermaker on July 13th. Mattie Suver and Aaron Braun each took home Bloomsday's top U.S. citizen prize of $5,000, plus open prize money. Kevin Castille of Lafayette, Louisiana, and Dorota Gruca of Poland each earned the top masters prize of $1,500.


In the men's wheelchair race it was an Illinois sweep, with Josh George earning his first victory at Bloomsday and Aaron Pike and James Senbeta in second and third. 2012 and 2013 champion Scott Parson of San Jose, California finished fourth.


"This is an amazing race with such a rich history," said George. "And to be able to win it is definitely a notch in your career pole."


Last year's women's champion, Susannah Scaroni, who grew up in nearby Tekoa, Washington and now attends the University of Illinois, improved by over a minute in scoring a second victory over seven-time champion Amanda McGrory. Masters winner was Brad Ray of Loveland, Colorado, while Santiago Sanz earned his tenth Quad 52 title, with Canadian Rob Mabey the Quad 51 victor.


Along with top competition in all Bloomsday divisions, finishers enjoyed performances from nearly 30 bands, vocalists and performing troupes along the course, eventually reaching the finish and claiming this year’s finisher T-shirt. Next year’s Lilac Bloomsday Run, the 39th, will be on Sunday, May 3rd, 2015. 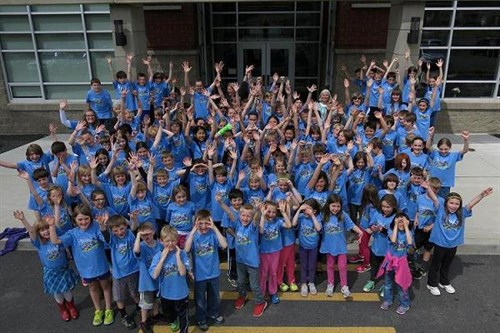 Students at Jefferson Elementary on the day after Bloomsday.