Spokane, Washington—It wasn't easy, but in the end Belete Assefa managed a decisive surge that carried him away from Kenyan Emmanuel Bett to become the first Ethiopian male champion in the 37-year history of the Lilac Bloomsday Run. Buzunesh Deba, meanwhile, made it three in a row for Ethiopian women at Bloomsday, as she shook off a determined effort by fellow Ethiopian Makida Adbela heading up Doomsday Hill, then cruised to a comfortable victory over the final two-and-a-half miles to the finish. 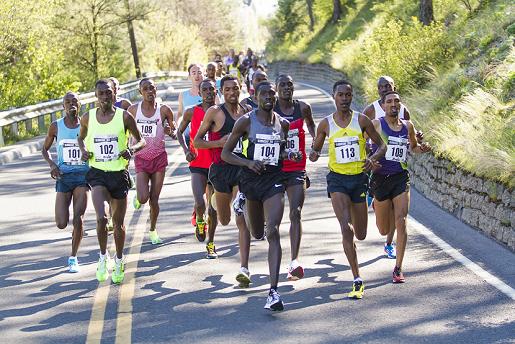 A field of over 51,000 signed up for this year's Bloomsday, all of whom were given a "Bloomsday Stands With Boston" bracelet to wear during the race. Also in honor of the victims of the Boston bombing, Bill Iffrig—the runner who the world saw knocked off his feet at the Boston finish line—served as celebrity starter for the event, before jumping into the crowd to try to add another age group championship to the seven he has earned over the past decade.

Many in the large crowd were no doubt motivated by the beautiful race day weather forecast in the days leading up to Sunday. For many, the temperatures that climbed steadily toward 60 degrees at the start would make the hilly 12-kilometer course (7.46 miles) a special challenge, but Deba showed no fear as she led the race almost from the gun. A pack of six trailed Deba as she passed the first mile in a swift 5:02, then followed with another 5:02 in mile two. At that point, though, as Deba headed up the first of the three hills on the course, she made a break, with only Abdela able to cover the move. Misiker Mekonnin, the 2011 Bloomsday champion who was expected to challenge for the title, had to scratch from the field on Thursday due to injury, but in her absence her two countrymen seemed positioned to battle for the top prize.

A chase pack that included Kenyans Alice Kimutai and Ogla Kimaiyo and American Kellyn Johnson hung on gamely for a while, but the two Ethiopians continued to build on their lead over the next two miles. It was a two-woman race at the base of Doomsday Hill, but by the five-mile mark at the top Deba dropped her final challenger. From there to the finish she built a commanding lead, crossing the line in 39:53, 22 seconds ahead of Abdela. Kimaiyo came in third, followed by fellow Kenyan Millicent Kuria, with Johnson the top American in fifth. 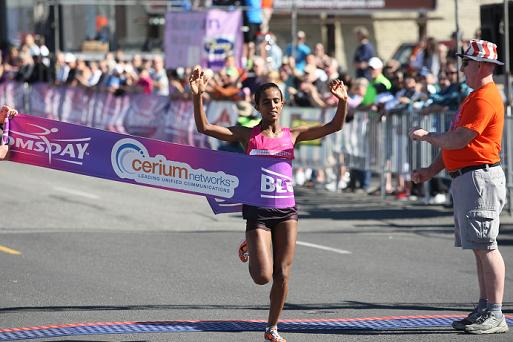 "I live in New York and I train in hot weather," said the winner, when asked about the warmish conditions. "So it's not too bad for me."

The men's field didn't seem to be bothered by the weather either, as a large group went through the first mile in 4:25, 15 seconds faster than last year. Emmanuel Bett led the group through most of the early miles, with Assefa and a group of mostly Kenyans close behind. At four miles Bett coasted back in what was then a pack of seven, while Assefa and 2012 Bloomsday champion Allan Kiprono traded the lead. As the pack neared the base of Doomsday Hill, though, Bett crept up on the outside and took the lead again.

Bett led a charge of what was now six runners up the hill, and as they reached the top the group began to disintegrate. A mile later only two men were still in front, Bett and Assefa. The duo passed the 10-kilometer mark in 28:43, then began the long haul down Broadway with Bett holding a narrow edge. Finally, with a quarter mile left, Assefa threw in a surge that propelled him around the Kenyan and into the lead. Bett admitted later that he felt a twinge in his hip that thwarted any hope he had of matching Assefa's sprint. By the finish, Assefa's margin of victory had climbed to 12 seconds.

"In 2011 I am 600 meters out and tired," remembered Assefa, who finished third that year to Simon Ndirangu and Allan Kiprono. "I went left, then right, a big mistake. This time I am good."

Victors Assefa and Deba each earned $7,000 for their wins, part of a purse of nearly $100,000 in all divisions of the race. Along with the prize money, both earned the right to compete for the PRRO Circuit Bonus of $10,000 at the Peachtree Road Race on July 4th. Kellyn Johnson and Brent Vaughn, who finished a solid eighth place in the men's race, each took home Bloomsday's top U.S. citizen prize of $5,000, plus open prize money. Mbarak Hussein of Albuquerque, New Mexico, and Dorota Gruca of Poland each earned the top masters prize of $1,500.

In the men's wheelchair race, 53-year-old Californian Scott Parson made it two Bloomsdays in a row, but this year it took him until the final 100 meters to shake his nearest competitor, Laurens Molina of Costa Rica. 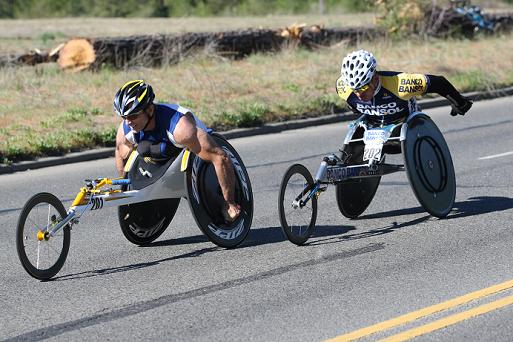 "Laurens caught me on Cemetery Hill," said the winner, "And we were together the rest of the race, neck and neck. I just happened to outsprint him at the end."

In the women's wheelchair race, Inland Northwest native Susannah Scaroni got out to an early lead and was never challenged, becoming the first woman from the region to earn the wheelchair title.

"I give it all to the people that have raced me and always believed in me," said Scaroni, who did her first Bloomsday at 12 years of age. "They got me to where I am."

Along with top competition in all Bloomsday divisions, 47,165 finishers enjoyed performances from nearly 30 bands, vocalists and performing troupes along the course, eventually reaching the finish and claiming this year’s finisher T-shirt. Next year’s Lilac Bloomsday Run, the 38th, will be on Sunday, May 4th, 2014.