April 8, 2013—Runners and readers alike are in for a treat at this year's Get Lit! Festival, as Bloomsday and SpokaneCommunity College have joined to sponsor an evening with writer Christopher McDougall. An avid runner and author, McDougall will be visiting Spokane on Wednesday, April 10th, beginning with a group run at 6:00 pm and followed by a reception and reading at 7:30. All events are at Spokane Community College.

McDougall is the author of the New York Times best seller, Born to Run: A Hidden Tribe, Super Athletes, and the Greatest Race the World has Never Seen (2009). The book centers around the Tarahumara Indians, a reclusive and fascinating tribe in northern Mexico who run extreme distances, sometimes up to 100 miles, without suffering the physical injuries that afflict many distance runners. McDougall explores the controversial idea that the expensive and carefully engineered running shoes we use today might actually be hindering our natural ability to run extreme distances. 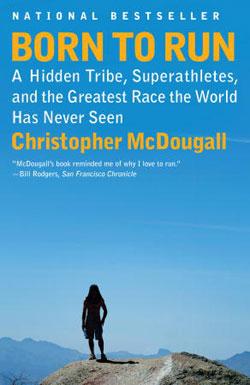 As a part of the Get Lit! Festivities and in anticipation of Bloomsday, McDougall will lead the group run at SpokaneCommunity College. The run will begin at 6 pm and will follow a four-mile loop heading west on Riverton, across the Mission St. Bridge, and will return on the Centennial Trail along Upriver Drive. All ages and skill levels are encouraged to participate and run at their own pace. Those wishing to participate should gather at the entrance to the SCC track.

SCC will host a reception outside of the Lair Auditorium following the run, where healthy snacks and refreshments will be provided. At 7:30 p.m. McDougall will give a reading, answer questions, and be available for book signings. Copies of Born to Run will be sold in the SCC bookstore.

All these events are free and open to the public and are presented in partnership with the Lilac Bloomsday Association, the HaganFoundationCenter for the Humanities, and the SCC Presidential Speakers Series.