Spokane, WA—With a little over two months before the 37th running of the Lilac Bloomsday Run, plans are well underway for yet another big crowd to take to the streets of Spokane on the first Sunday in May. Mild winter weather seems to have encouraged early signups, as over 10,000 runners and walkers have jumped on board since online registration opened on January 1. And for those who didn’t join in the early surge, there’s still plenty of time to sign up for the popular 12-kilometer (7.46 mile) road race, which takes place on Sunday, May 5.

“We won’t know until race weekend exactly how many people will join Spokane’s annual celebration of health and community,” said Bloomsday Association President Steven Jones. “But based on early interest it’s pretty clear that this year’s Bloomsday is going to be another memorable event.” 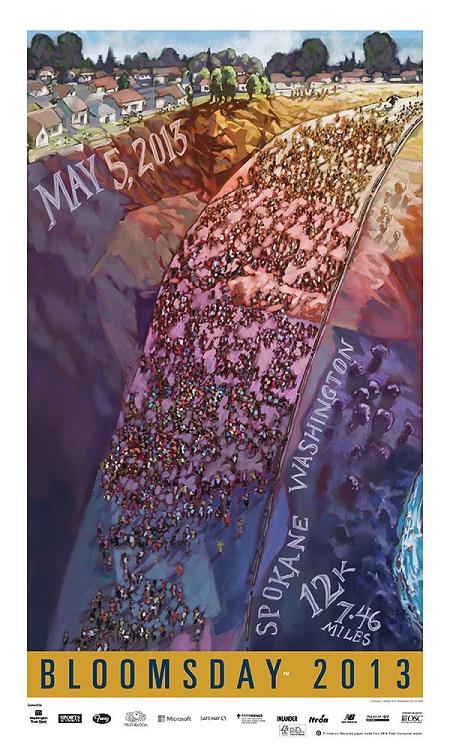 Along with online registration, printed entry brochures will soon be available at hundreds of locations in the Inland Northwest. Meanwhile, more than 7,000 elementary school children have already begun getting in shape by participating in a Fit For Bloomsday…Fit For Life training program at one of over 70 participating schools in the region. The Fit For Bloomsday program is now in its 28th year. Kids in the program will be the first to receive the eight different Bloomsday “character cards” that will be introduced this year, beginning with Spaghetti Betty (Carbo-Loader Extraordinaire) and Doomsday Hill-Billy (Always Inclined to Run).The trading cards will also be available at the Bloomsday Trade Show.

Bloomies are encouraged as part of the registration process to support Bloomsday’s official 2013 charity, the Martin Luther King, Jr. Family Outreach Center (MLKCenter). With over 40 years of history in Spokane, the MLKCenter has become a regionally recognized community social service center which provides hope and a step up to those who need it. Bloomies can support the MLKCenter by adding a donation when they sign up online or through the mail.

The Bloomsday experience this year will be similar to what participants enjoyed in 2012, with everyone starting on Riverside Avenue near Lincoln Street and finishing at the north end of the MonroeStreetBridge, just above the SpokaneRiver falls. Timing this year will once again be accomplished with the B-tag, the latest adaptation of RFID technology. Instead of removing the tag from the runner number and tying it in the laces of one’s shoes, the B-tag  is embedded on the number itself and only has to be worn to work. And to take advantage of the technology, participants this year will again be given a “Time Up Doomsday” in addition to their finish results after the run.

Those entering online for this year’s Bloomsday Run, which represented nearly 83% of the field in 2012, will continue to enjoy features that are only available to online entrants. This includes an email about a week before Bloomsday weekend letting them know their race number and the color of their starting group, as well as the option to keep family and friends together in the same starting group. Online entrants may also want to join Bloomsday’s Facebook fan page, which currently boasts over 14,000 fans. In addition, online entrants can sign up later this spring to have to have their real-time results instantly broadcast to Facebook, Twitter and mobile phones as soon as they cross the finish line.

To help people get ready for this year’s 12-kilometer challenge, Bloomsday has once again partnered with Step Up and Go—a local non-profit organization which is encouraging area residents to engage in daily physical activity and healthier eating year-round—to offer training programs for Bloomsday participants. In addition, sign up for two national training programs—Runcoach and the Lydiard Running Wizard—is available during online registration.

Those looking for inspiration in their training may want to take advantage of a talk by Christopher McDougall, author of the best-seller Born to Run. McDougall will speak at SpokaneCommunity College at 7:30 p.m. on April 10th, with a 4-mile group run preceding the talk. McDougall believes human beings evolved to run hundreds of miles at a time, because it was “the way we survived and thrived and spread across this planet.” McDougall also asserts that we were born to run without all the fancy footwear we’ve been led to believe is necessary.

Along with the run itself, this year’s Bloomsday weekend will feature the eighth annual Marmot March, a non-competitive one-mile kids’ event in RiverfrontPark on Saturday, May 4, the day before Bloomsday. The Marmot March is for children second grade and younger who run with their parents, and is sponsored by Franz Bakery. It is open for the first 300 children who sign up.

2013 also marks the return of Junior Bloomsday for 3rd and 4th grade runners, who will race over the same one-mile route as the Marmot March. This competitive race will be open to the first 200 3rd and 4th graders who sign up. It will take place one hour prior to Marmot March in RiverfrontPark. Times will be recorded and T-shirts will be provided to all finishers.

Also on Bloomsday weekend, the Bloomsday Trade Show, which is held in conjunction with Check-In at the SpokaneConvention Center, will once again have a variety of displays and activities centering on health and fitness, as well as providing the opportunity to purchase running and fitness gear. Those looking for memorabilia of their Bloomsday experience will find a variety of souvenir shirts and other items with the Bloomsday logo as well. These items may also be purchased during the online registration process. After the run most Bloomies enjoy gathering in RiverfrontPark, where a variety of post-race festivities take place, and where food will be available for purchase in the Bloomsday Food Court.

Bloomsday is proud of its efforts to be more environmentally sensitive, as demonstrated by the successful composting of over a ton of discarded water cups in each of the past four years. Bloomsday participants will once again be asked to help reduce, reuse and recycle as part of Bloomsday’s “Getting Greener” initiative. Please look for and use the appropriate recycling and composting containers, which will be set up in RiverfrontPark for use after the run.

In addition to the elite racers at Bloomsday, top age-group runners will vie for medals, local stars will hope to earn a free trip to Atlanta’s Peachtree Road Race, and businesses will scramble for top honors among over 250 teams in the Corporate Cup, which is sponsored again this year by Orthopaedic Specialty Clinic. Scoring in this year’s Corporate Cup has been adjusted so that only the times of Corporate Cup participants will be used to compute team scores.

For those farther back in the pack, on-course entertainment and the cheers of spectators will make the journey fun and memorable. During its thirty-seven years Bloomsday has become a favored spring gathering place for families and friends, most of whom complete the course and collect the coveted finisher’s shirt, the color and design of which are kept secret until the finish line. This year, in recognition of the large number of parents who push their infants and toddlers in strollers over the route, a youth extra small T-shirt has been added to the options available to finishers. For many of our youngest participants, this will be the first Bloomsday finisher T-shirt in a lifelong collection, and undoubtedly the smallest.

Online registration for Bloomsday ’13 is open at www.bloomsdayrun.org, and printed entry brochures will soon be available at locations throughout the Inland Northwest. The on-time entry fee for Bloomsday is $17.00 this year, the lowest in the nation for a major running event. Mailed entries must be postmarked by April 16 to avoid the late entry fee of $35.00. In addition, two local Sports Authority stores will be taking entry forms from March 4 until the entry deadline of April 16, and online registration at the $17.00 fee will be available until April 21.