November 8, 2013—As a highlight of the celebration of the 30th anniversary of the Road Race Management Race Directors’ Meeting, Don Kardong was announced as the first ever MarathonFoto/Road Race Management Lifetime Achievement Award winner. The award was made for contributions to the sport of long distance road running over the course of a lifetime. Scores of nominations were received that read like a Who’s Who of running. The 10-member committee had the difficult task of reviewing the nominees and reducing the field to four finalists. In addition to Kardong, the finalists were Fred Lebow, former New York Marathon Director; Dave McGillivray, Director of the Boston Marathon and many other events; and Gar Williams, former RRCA and DC Road Runners President who founded the Credit Union Cherry Blossom Race and reinvigorated the RRCA. 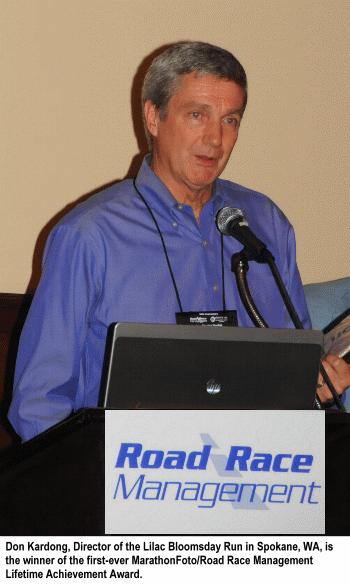 The award was presented at the annual Road Race Management Race Directors’ Meeting at the keynote dinner November 8 in Hollywood, FL.

In presenting the award, Jeff Darman, a former RRCA President, recent USATF board member and long-time race director said, “Don played a major role in helping to establish the open prize money system for road races. As President of the Association of Road Racing Athletes (ARRA), he led a powerful and courageous coalition of race directors and elite athletes who risked eligibility and who stood up to the powerful NGB and eventually changed the system. He went on to many other leadership roles in TAC (now USATF) and the RRCA and at each stop elevated the sport to another level and left it in a better place. Now President of PRRO, the Professional Road Running Organization, he leads a circuit of races in the forefront of aggressive drug testing, self-funded by each circuit event, in an attempt to make and keep our sport clean. It is fair to say his experience as an athlete, a race founder, race director, a leader and a writer stand unparalleled.”

Road Race Management (www.rrm.com) is a member-based organization that publishes a newsletter and many other publications designed for race and industry professionals, and conducts a prestigious annual national race directors’ meeting and trade show in Florida. MarathonFoto (www.marathonfoto.com) is the world’s largest race photography company.