The Bloomsday crowd may have been tired after cresting Doomsday Hill, but it appears they weren't too tired to appreciate vocalist Adrienne Bousquet's "Sequins and Sinatra” performance near the six-mile point. Bousquet, who was at the corner of Lindeke and Gardner, moved up a notch from her second place showing last year to claim the title of Best Bloomsday Entertainer in the ninth annual contest among performers along the 12-kilometer course. 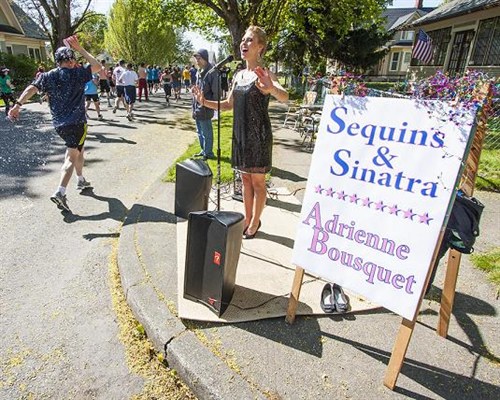 Bousquet's victory came in spite of strong showings by indie rock band Black Gingham and soloist Tori Whitten, who finished second and third. Black Gingham performed during the first mile of the route, while Tori Whitten was on Ft. George Wright Drive just before the TJ Meenach Bridge.

Whatever their preference in entertainment, Bloomsday runners, joggers, walkers and wheelers seemed to enjoy the performances, as they cast 1,274 votes this year forthe nearly 30 performers on the course.

"We had great weather again this year, and that gave the performers a perfect opportunity to entertain,” said Bloomsday Board Member Dori Whitford, who along with volunteer Laurel Warner organized the competition. "And almost every performer along the route earned a fair number of votes.”

Adrienne Bousquet will earn the top prize of $500 in this year's Best Bloomsday Entertainer contest, while Black Gingham and Tori Whitten will get the 2nd and 3rd place awards of $300 and $200. Additional cash rewards will be paid out through random drawings.