The votes are in, and for the second straight year Small Town Nation has emerged as the crowd favorite at the Lilac Bloomsday Run. Situated on the median at the bottom of Pettet Drive (Doomsday Hill), the band’s mix of punk rock and pop punk proved popular with enough voters to earn them the top spot in the eighth annual Best Bloomsday Entertainer contest. 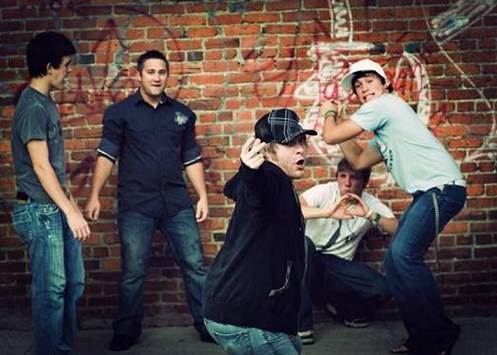 Small Town Nation’s victory came in spite of strong showings by Adrienne Bousquet and Rhythm Envy, who finished in second and third. Bousquet’s advertised “Sequins and Sinatra” performance at Lindeke and Gardner was popular with many voters, while bucket drummers Rhythm Envy were a hit just after the turnoff from Government Way onto Ft. George Wright.

Whatever their preference in entertainment, Bloomsday runners, joggers, walkers and wheelers seemed to enjoy the performances, as they cast 1,713 votes this year forthe 35 performers on the course. That was over 600 more votes than were cast in the 2010 contest.

“We had great weather again this year and more performers than we’ve ever had,” said Bloomsday Board Member Dori Whitford, who along with volunteer Laurel Warner organized the competition. “And almost every performer along the route earned a fair number of votes.”

Small Town Nation will earn the top prize of $500 in this year’s Best Bloomsday Entertainer contest, while Adrienne Bousquet and Rhythm Envy will get the 2nd and 3rd place awards of $300 and $200. Additional cash rewards will be paid out through random drawings.