Signups Set Torrid Pace; 35th Running Promises to be a Big One

Spokane, WA—Early entries are running over 40% ahead of last year’s pace, and the Corporate Cup Competition reached its 250 team limit in less than three days, so it's clear that interest in the 35th running of the Lilac Bloomsday Run is setting a blistering early pace. There are just over two months left until the popular 12-kilometer (7.46 mile) road race, which is scheduled for Sunday, May 1.

“The early interest is a great sign,” said Bloomsday Association President Carol Hunter. “Last year we had our largest number of recorded finishers since 1996, and it’s looking like this year we’ll have another increase.” 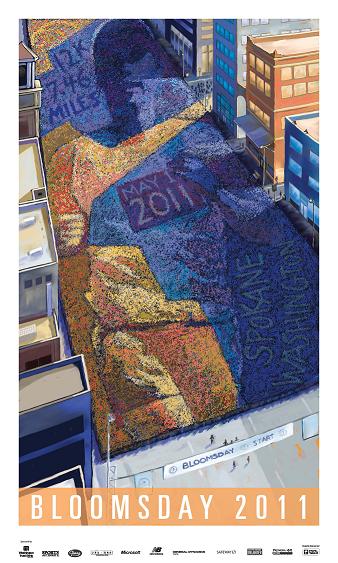 Along with online registration, which has been open since January 1, printed entry brochures will soon be available at hundreds of locations in the Inland Northwest. Meanwhile, over 6,000 elementary school children have already begun getting in shape by participating in a Fit For Bloomsday…Fit For Life training program at one of nearly 70 participating schools in the region. The Fit For Bloomsday program is now in its 26th year.

Most of the Bloomsday experience this year will be similar to what participants enjoyed in 2010, with everyone starting onRiverside Avenue and finishing at the north end of the Monroe Street Bridge, just above the Spokane River falls. The D-tag timing system implemented last year will be used again to accurately time every entrant from start to finish. One change, though, in celebration of the 35th running of Bloomsday, will be an increase in the number of performers along the 7-1/2 mile course, from 29 to 35. Also in celebration of the 35th, Bloomsday will offer a special medal for sale, and prizes will be awarded after the run for the 35th, 350th, 3,500th and 35,000th finishers.

Another change this year will be in the number of teams participating in the Bloomsday School Challenge. Last year the School Challenge, which matches four-person teams of teen runners from area middle schools and high schools, had 27 teams. That number will be increased to 60 this year.

To help people get ready for this year’s 12-kilometer challenge, Bloomsday has partnered with a new non-profit called Step Up Spokane—which is encouraging residents to engage in daily physical activity and healthier eating year-round—to offer training programs for Bloomsday participants.

Those entering this year’s Bloomsday online, which represented 80% of the field in 2010, will continue to enjoy features that are only available to online entrants. That includes an email about a week before Bloomsday weekend letting them know their race number and the color of their starting group, as well as the option to keep family and friends together in the same starting group. Online entrants may also want to join Bloomsday’s Facebook fan page, which currently boasts nearly 8,000 fans, and which will be inviting Bloomies to post photos of themselves, family or friends wearing Bloomsday shirts in interesting or exotic locations. Bloomsday also has a Twitter account this year for anyone wanting to receive regular tweets about the event.

Along with the run itself, this year’s Bloomsday weekend will feature the sixth annual Marmot March, a non-competitive 1.2-mile kids event in Riverfront Park on the day before the run. The Marmot March is for children second grade and younger and their parents,. The Marmot March is sponsored by Franz Bakeries and is open for the first 300 children who sign up.

Also on Bloomsday weekend, the Trade Show, which is held in conjunction with Check-In at the Spokane Convention Center, will once again have a variety of displays and activities for those interested in health and fitness. After the run participants can enjoy a variety of post-race festivities and food from the Bloomsday Food Court in Riverfront Park.

For those looking for memorabilia of their Bloomsday experience,a wide assortment of souvenir gear with the Bloomsday logo will also be offered online, and a special environmentally friendly shirt made of recycled polyester with bamboo charcoal will be available for purchase during online registration and at the Trade Show.

After successfully composting over a ton of discarded water cups in each of the past two years, Bloomsday participants will once again be encouraged to help reduce, reuse and recycle as part of the Bloomsday’s “Getting Greener” initiative. Participants are also encouraged to support Bloomsday’s official 2011 charity, Hospice of Spokane, Spokane’s only not-for-profit hospice. Hospice of Spokane has provided care and support for the terminally ill in our community since 1977, regardless of their ability to pay. Bloomies can support Hospice of Spokane by adding a donation when they sign up online or through the mail.

While there have been many changes in Bloomsday in recent years, some things remain the same. Competition at the front end promises to be fierce, as world-class racers and wheelchairs battle for prize money, which includes a $20,000U.S. citizen’s purse. In addition, top age-group runners will vie for medals, local stars will hope to earn a free trip toAtlanta’s Peachtree Road Race, and businesses will scramble for top honors among over 250 teams in the Corporate Cup, which is sponsored again this year by Orthopaedic Specialty Clinic.

For those farther back in the pack, on-course entertainment and the cheers of spectators should help make the journey fun and memorable. During its thirty-five years on the Spokane scene, Bloomsday has become a favored spring gathering place for families and friends, most of whom complete the course and collect the coveted finisher’s shirt, the color and design of which are kept secret until the finish line.

Online registration for Bloomsday ’11 is open at www.bloomsdayrun.org, and printed entry brochures will soon be available at locations throughout the Inland Northwest. The on-time entry fee for Bloomsday is $15.00 again this year, the lowest in the nation for a major running event. Mailed entries must be postmarked by April 12 to avoid the late entry fee of $30.00. In addition, two local Sports Authority stores will be taking entry forms from now until the entry deadline of April 12.