Two Spokane runners—Nathan Weitz of Shadle and Andrew Gardner of Mead—are headed to San Diego this weekend to compete in the prestigious Foot Locker National Cross Country Championships, to be held Saturday at Balboa Park. The runners qualified for the national championship by finishing in the top ten at the Foot Locker West Regional Cross Country Championships last weekend at Mt. San Antonio College (Mt. SAC). Weitz and Gardner finished second and fourth respectively in the Boys Seeded race. 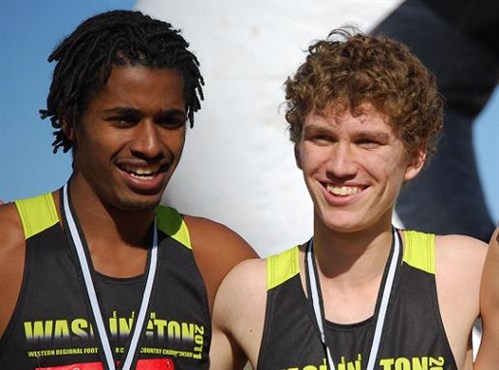 This will be the second trip to Foot Locker Nationals for both runners. Last year Weitz finished 31st in the national race, while Gardner finished fourth, one of the best finishes at Foot Locker Nationals ever recroded by a Spokane runner. No Spokane runner has ever won the Foot Locker Nationals, which have been held annually since 1979, but Matt Davis of Mead finished third in 1993, and two Spokane girls have finished fourth—Sarah Schwald of Mead in 1989 and Megan O'Reilly of Mt. Spokane in 2005. The highest finish by any Washington runner was second by Andrew Maris of White River High School (Buckley) in 1989. The highest finish by a Washington female was by Sarna Renfro of Bellarmine Prep, who finished third in 1993.

The West Regional meet where Weitz and Gardner qualified last weekend was one of four Foot Locker competitions held across the country. For the nineteenth straight year, over 30 Spokane-area runners had their airline tickets to the Foot Locker meet donated by the Lilac Bloomsday Association. The Bloomsday Association provides airline tickets and ground transportation to runners based on times at regional cross-country meets held in the fall.