Spokane, WA—Lineth Chepkurui seemed unfazed by having World Cross Champion Emily Chebet-Muge and 2010 Dubai Marathon champion Mamitu Daska on her heels for much of the 34th annual Lilac Bloomsday Run, as the Kenyan star used Doomsday Hill to break away and surge ahead to notch a third straight victory with a stunning new world 12K best of 38:10. In the men’s race, fellow Kenyan Peter Kirui eased up Doomsday at the back of a pack of eight but then accelerated and steadily distanced himself from the field, moving ahead over the final two miles to earn a Bloomsday title in his first attempt. 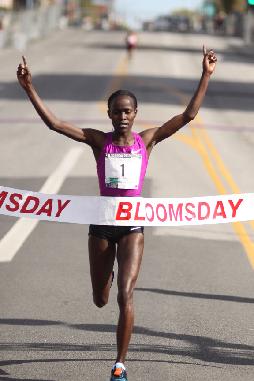 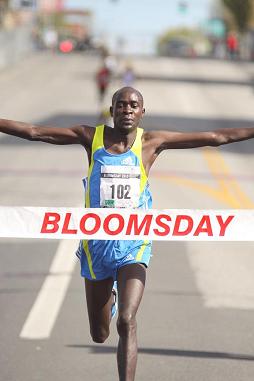 A field of 55,088 signed up for this year’s Bloomsday Run, an increase of nearly 4,000 over last year. Runners were greeted by nearly cloudless skies and cool temperatures in the mid-40s, with occasional gusts of wind. With mostly favorable running conditions, it didn’t take long for the trio of Chepkurui, Chebet-Muge and Daska to break away from the rest of the field. By three miles it had clearly shaped into a three woman battle, with Chepkurui in the lead and using each of Bloomsday’s three hills to try to break away.

That effort finally paid off toward the top of Doomsday, the third and most famous hill on the course, as Chepkurui inched into the lead. At five miles she was slightly ahead of Bloomsday record pace, but once in the lead she seemed to gain steam, increasing her lead steadily over the final miles. Her winning time of 38:10 eclipsed Delillah Asiago’s 1995 course record of 38:31, a time adjusted to reflect what proved to be a short course, and Chepkurui’s time also obliterated the listed world 12K road best of 38:22 set by Asmae Leghzaoui of Morocco at the 2005 Bay to Breakers. Chepkurui finished 15 seconds ahead of Daska and 40 seconds ahead of Chebet-Muge.

In the men’s race, a modest pace through the early miles kept a pack of eight Kenyans together all the way to Doomsday Hill, near the five-mile mark. Stephen Muange pushed the pace up the hill, hoping to use the ascent as so many have done in the past to make a break, but this time the hill didn’t shake a single runner. At the top, the pack still numbered eight. One of those was Kirui, who was waiting to pounce.

“I stayed behind them because I tried to come up the hill,” said Kirui later. “But it was windy, so I thought it was better for me to stay behind.”

But not for long. As the incline flattened out, Kirui surged into the lead, and the pack finally began to string out single file behind him. Julius Kogo gave chase, as did Muange and three-time Bloomsday champion John Korir, but no one was able to quite match Kirui’s surges. He would speed to a 34:28 victory, five seconds ahead of Kogo, with Muange and Korir a few seconds farther back. Kenyans took the first eight places, with pre-race favorite Ridouane Harroufi and American Dan Browne rounding out the top ten.

Browne’s performance earned him the $5,000 prize money paid to the top American for the second straight year, a feat duplicated by Sally Meyerhoff in the women’s race. In masters competition, Mbarak Hussein took the men’s title, while Nicole Hunt of Deer Lodge, Montana, earned her first masters title since turning forty a few days earlier.

In the men’s wheelchair race, a pack of five stayed close until two miles, when Jordan Bird of Tucson, Arizona took the lead. 2008 Bloomsday champion Aaron Gordon and Scott Parson of San Jose, California, gave chase, but it was to be Bird’s day. Bird stormed up Doomday Hill and on to the finish for a victory by nearly 2 minutes. 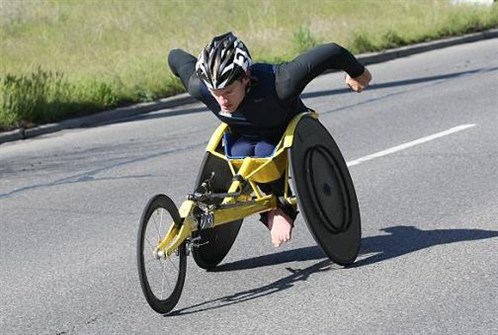 In the women’s wheelchair division, three-time Bloomsday champion Amanda McGrory of the University of Illinois whittled down a huge lead established by Shirley Reilly of the University of Arizona on the first downhill, and then, after gaining the lead by mile two never relinquished it. Her winning time of 35:15 was a half-minute ahead of Reilly.

In the masters division, eight-time open wheelchair champion Craig Blanchette was victorious in his return to the streets ofSpokane, while Santiago Sanz-Quinto (T-2) and Jimbo Boyd (T-1) earned victories in their respective quad divisions.

Nearly $100,000 was awarded in open, masters, US citizen, wheelchair and Washington state resident divisions in this year’s Bloomsday Run. Along with spirited elite competition in all divisions, over 50,000 finishers enjoyed performances from nearly 30 bands, vocalists and performing troupes along the course, eventually reaching the finish and claiming this year’s finisher T-shirt. Next year’s Lilac Bloomsday Run, the 35th, will be on Sunday, May 1st, 2011.