Spokane, WA—Lineth Chepkurui made it two in a row in the women’s race, while third time was a charm for John Yuda in the men’s competition, as the two stars outraced outstanding fields to win the 33rd edition of the Lilac Bloomsday Run. 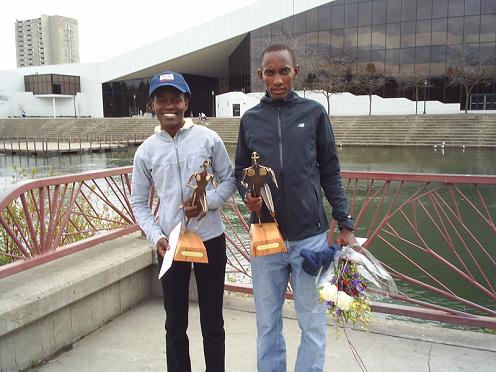 A field of 51,258 signed up for this year’s Bloomsday Run, an increase of nearly 4,000 over last year. Runners were greeted with chilly conditions for the race start, with the temperature at 45 degrees and a slight breeze out of the southwest, but it didn’t take long for Chepkurui to heat things up. 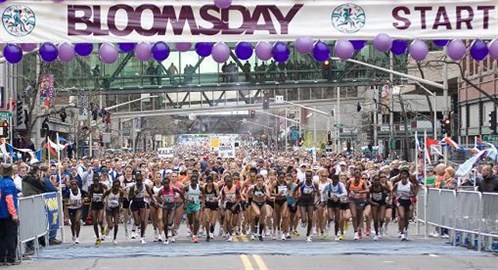 A pack of nearly 20 stayed with her through the first mile-and-a-half, but then the pack began to thin as the runners headed up the first hill. By the third mile Chepkurui had begun to gap most of the talented pack except for Ethiopian Teyba Erkesso, who hung on gamely to the bottom of Doomsday Hill, the final ascent on the course. 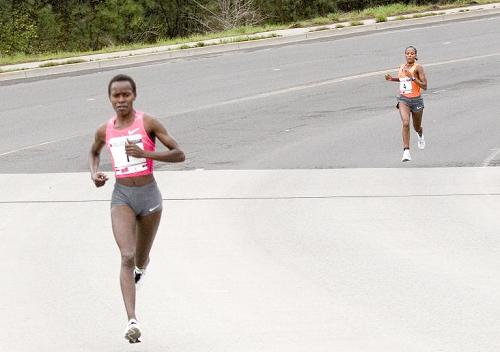 Chepkurui leads Erkesso across the Meenach Bridge just before the climb of Doomsday Hill. Photo by Lisa Stonecipher.

Going up the hill to the five-mile mark, the Kenyan-Ethiopian matchup began to unravel, as Chepkurui poured it on. Chepkurui crested the hill in the lead, and from there to the finish she continued to build on her margin, finishing in 38:37. It was the fastest women’s time ever recorded at Bloomsday except for Delillah Asiago’s 1995 time of 38:31, a time adjusted to reflect what proved to be a short course. Erkesso finished 40 seconds behind in 39:17, and the next four women all broke 40 minutes. It was the first time in Bloomsday history that six women finished under the 40-minute mark. Sally Meyerhoff of Temp, AZ, was the first American with a tenth place finish.

In the men’s race, a pack of more than 20 runners stayed together through miles one (4:41) and two (4:35), but then a group of eight began to separate from the field, led by Yuda, Robert Letting of Kenya and Karim Elmabchour of Morocco. 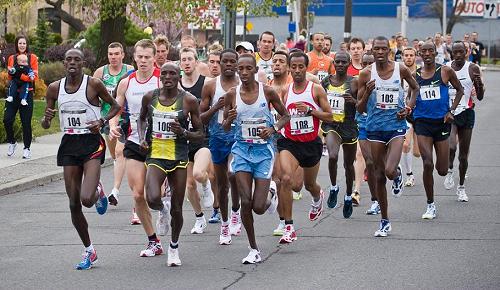 Just past four miles Yuda and Letting began to pull away, and those two surged up Doomsday Hill together. 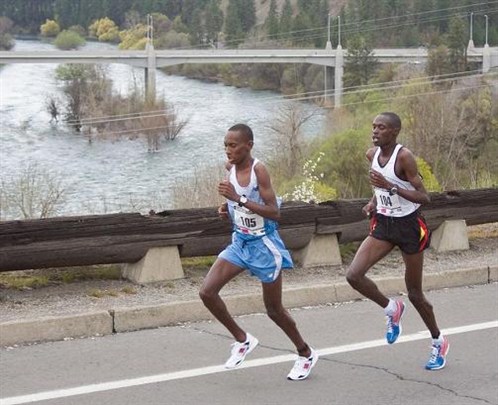 The battled continued as they crested the hill and passed the five-mile mark, but a half-mile later Yuda began to inch into the lead. The Tanzanian, who was Bloomsday runnerup in 2007 and sixth last year, built his lead steadily from there to the finish, becoming the first non-Kenyan to win since Arturo Barrios in 1993. Though his win was convincing, Letting and a string of other top runners were never far behind, including top American Dan Browne, who moved up to take the fifth spot and the US citizen prize of $5,000. Pre-race favorite Charles Munyeki slipped well off the leaders to finish fourteenth.

In wheelchair competition, a pack that included 2008 winner Aaron Gordian and ten-time Bloomsday champion Saul Mendoza battled in the early miles with former South African racer Krige Schabort, who lost a duel with Mendoza in Bloomsday ’07 by a scant six inches. This time it was Schabort’s turn, as he broke open the field at 3 miles and continued to add to his margin to the finish, winning by nearly a minute over Gordian, with Mendoza, Joshua George and Scott Parson close behind Gordian. 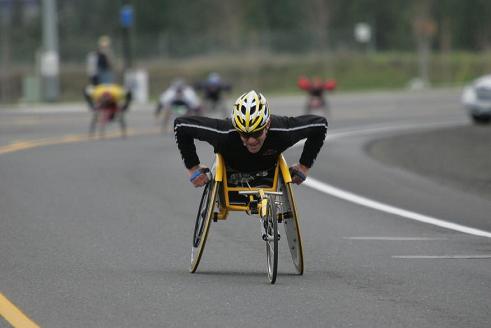 In the women’s wheelchair race, Amanda McGrory of the University of Illinois broke away at the top of the first hill and never looked back, notching her third straight Bloomsday victory, as she finished ahead of past champions Shirley Reilly and Ariadne Hernandez.

The Master’s wheelchair race was won by Bloomsday rookie Juan Rios from Houston, TX in 34:29; Scott Stokes won the T-1 Quad division in 1:15:21; and Spaniard Santiago Sanz-Quinto scored his 5th consecutive win in the T-2 Quad division in 32:46. Bloomsday’s Collegiate Challenge Trophy went to the University of Illinois.

Nearly $100,000 was awarded in open, masters, US citizen and Washington state resident divisions in this year’s Bloomsday Run. Along with spirited elite competition in all divisions, over 45,000 finishers enjoyed performances from nearly 30 bands, vocalists and performing troupes along the course, eventually reaching the finish and claiming this year’s finisher T-shirt. Next year’s Lilac Bloomsday Run, the 34th, will be on Sunday, May 2nd, 2010.