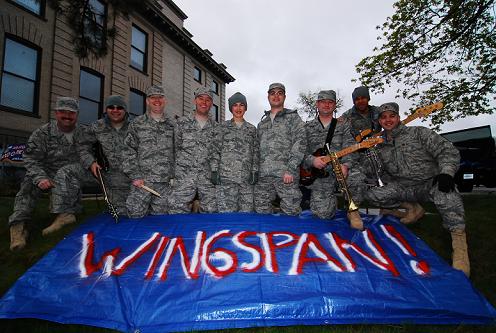 Wingspan was located at Integrus near the intersection of Riverside and Cedar, where their rock music captured the fancy of Bloomsday runners, joggers, walkers and wheelers who were less than a mile into the seven-and-a-half mile course. 1,217 votes were cast in this year’s competition, an increase of 23% over last year.

“It’s great that more and more people are logging on to our web site to vote each year,” said Bloomsday Board Member Dori Robertson, who along with volunteer Laurel Warner organized the competition. “I’m beginning to think people enter Bloomsday just to be able to vote for a favorite band.”

The top three vote getters in this year’s Best Bloomsday Entertainer contest qualify for prize money of $500, $300, and $200, with additional cash rewards paid out through random drawings. Wingspan has elected to donate their winnings to the Spokane Air Guard Booster Club at Fairchild Air Force Base.