Spokane, WA—A year ago Spokane was reeling from one of the toughest winters in its history, but the harsh conditions actually seemed to encourage sign-ups for the 2008 Lilac Bloomsday Run, as the field increased by more than 3,000 over the previous year. With this year’s winter being even tougher, organizers are bracing for another surge of entries for the 33rd annual Lilac Bloomsday Run, which is scheduled for Sunday, May 3. 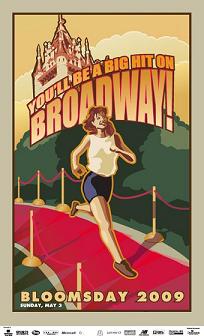 “Discouraging winter weather seems to work in our favor,” said Bloomsday Association President Jerry O’Neal. “And while nothing is certain, early online registrations seem to suggest another growth spurt this year.”

Online registration has been robust since opening on January 1, and it shows no sign of slowing down. Along with online registration, printed entry brochures will soon be available at hundreds of locations in the Inland Northwest. Meanwhile, nearly 6,000 elementary school children have already begun getting into shape by participating in a Fit For Bloomsday…Fit For Life training program at one of 70 participating schools in the region. The Fit For Bloomsday program, sponsored this year by Safeco Insurance, is now in its 24th year.

To help kick off the Bloomsday training season, the Lilac Bloomsday Association is hosting a talk by marathon star Dick Beardsley this Thursday, February 26th, at Lewis and Clark High School. Beardsley’s talk, scheduled for 7:00 p.m. in the school theater, will cover both Beardsley’s famous “Duel in the Sun” with Alberto Salazar at the 1982 Boston Marathon, and also his struggles to recover from addiction to pain medication after a series of horrific accidents.

Most of the Bloomsday experience this year will be similar to what participants enjoyed in 2008, with everyone starting onRiverside Avenue and finishing at the north end of the Monroe Street Bridge, just above the Spokane River falls. An estimated two dozen performers will keep things lively along the 7-1/2 mile route, and computer chip timing will allow every entrant to be accurately timed from start to finish.

Those entering this year’s Bloomsday online, which represented 70% of the field in 2008, will continue to enjoy features that are only available to online entrants. That includes an email about a week before Bloomsday weekend letting them know their race number and the color of their starting group, as well as the option to keep family and friends together in the same starting group. Online entrants may also want to join Bloomsday’s Facebook fan page, which will keep them updated on information about the run while giving them a chance to exchange notes with fellow enthusiasts.

Along with the run itself, this year’s Bloomsday weekend will also feature the fourth annual Marmot March, a non-competitive 1.2-mile kids event in Riverfront Park on the day before the run. The Marmot March is for children second grade and younger and their parents, and it includes an .8-mile route for those wanting a shorter trek. The Marmot March is sponsored by Franz Family Bakeries and is open for the first 300 children who sign up.

Also on Bloomsday weekend, the Trade Show, which is held in conjunction with Check-In at the Spokane Convention Center, will once again have a variety of displays and activities for those interested in health and fitness. After the run participants can enjoy a variety of post-race festivities in Riverfront Park. Tickets for a post-race lunch can be purchased during online registration or at the Bloomsday Trade Show.

For those looking for memorabilia of their Bloomsday experience, participants will once again be able to purchase personalized Bloomsday souvenir gear from VictoryStore.com. This means they can individualize apparel with a name, company, number of Bloomsdays run, and other information. They can also purchase environmentally friendly apparel during online registration and at the Trade Show. A variety of souvenir products will be available that are made of recycled polyester with bamboo charcoal to increase wicking properties. Offering products made of recycled and earth-friendly materials is part of this year’s “Getting Greener” initiative by Bloomsday organizers, an attempt to reduce the event’s environmental impact.

Along with supporting the “Getting Greener” initiative, this year’s Bloomsday entrants are also encouraged to support the YMCA/YWCA Capital Campaign—Your Y (you’re why)—the official 2009 Bloomsday charity. Bloomsday organizers selected the YMCA and YWCA Capital Campaign because of those organizations’ longterm role in promoting health and fitness in the greater Spokane area. The new combined Y facility will encourage everyone in the community—infants, children, teens, adults and seniors—to live active, healthy lives. The facility will have its grand opening the afternoon following the run.

While there have been many changes in Bloomsday in recent years, some things remain the same. Competition at the front end promises to be fierce, as world-class racers and wheelchairs battle for prize money, which this year includes a $20,000 U.S. citizen’s purse. In addition, top age-group runners will vie for medals, local stars will hope to earn a free trip toSan Francisco’s Bay to Breakers or Atlanta’s Peachtree Road Race, and businesses will scramble for top honors among over 250 teams entered in the Corporate Cup competition, which is sponsored this year by Orthopaedic Specialty Clinic.

For those farther back in the pack, on-course entertainment and the cheers of spectators should help make the journey fun and memorable. During its thirty-three years on the Spokane scene, Bloomsday has become a favored spring gathering place for families and friends, most of whom complete the course and collect the coveted finisher’s shirt, the color and design of which are kept secret until the finish line.

Online registration for Bloomsday ’09 is open at www.bloomsdayrun.org, and printed entry brochures will soon be available at locations throughout the Inland Northwest. The on-time entry fee for Bloomsday is $15.00 this year, one of the lowest in the nation for a major running event. Mailed entries must be postmarked by April 14 to avoid the late entry fee of $30.00. In addition, two local Sports Authority stores will be taking entry forms from now until the entry deadline of April 14.