Spokane, WA—As piles of snow and ice from one of the toughest winters in Spokane history finally melt, Bloomsday organizers are reminding Inland Northwest residents that the first Sunday in May is rapidly approaching, and along with it the 32nd annual Lilac Bloomsday Run.

“This winter has kept a lot of people indoors and inactive,” said Lilac Bloomsday Association President Jon Neill. “But judging from our early online registrations, everyone is eager to start getting ready for Spokane’s annual rite of spring.”

Online registration has been nearly double what it was at the same time last year, suggesting that there may be an upsurge in Bloomsday attendance this year. Along with the opportunity to sign up online, printed entry brochures will soon be available at hundreds of locations in the Inland Northwest. Meanwhile, nearly 6,000 elementary school children have already begun getting into shape by participating in a Fit For Bloomsday…Fit For Life training program at one of over 60 participating schools in the region. The Fit For Bloomsday program, sponsored this year by Safeco Insurance, is now in its 23rd year. 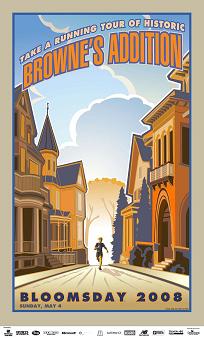 On the heels of several years of major changes—including a new starting procedure, new finish line, and individualized timing using radio frequency ID (computer chips) —this year’s Bloomsday will make some additional adjustments and add some new features that should please the crowd. For the first time, online registrants will receive an email about a week before Bloomsday weekend letting them know their race number and the color of their starting group. Together with a feature available during online registration that allows a group of family and friends to be assigned to the same color goup, this should make online registration even more attractive to entrants. In 2007, nearly two-thirds of the field took advantage of online registration.

This year’s Bloomsday is also planning to build on several other recent innovations that have been crowd pleasers. The Marmot March, a non-competitive 1.2-mile kids event in Riverfront Park on the day before Bloomsday, has been expanded to include second graders, and an .8-mile route has been added for those wanting a shorter trek. The Marmot March is sponsored by Franz Family Bakeries and is open for the first 300 children who sign up.

The Bloomsday Trade Show, which is held in conjunction with Check-In at the Spokane Convention Center, will once again have a variety of displays and activities for those interested in health and fitness. In addition, Bloomsday will feature women’s running pioneer Kathrine Switzer for a talk at the DoubleTree Hotel at 2:00 p.m. on Saturday, May 3. Switzer, the first woman to officially run the Boston Marathon, will have her new book, Marathon Woman, available for sale. 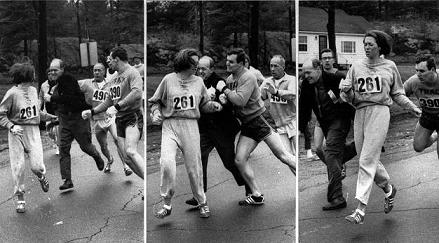 In 1967, irate race official Jock Semple tried to forcibly remove Kathrine Switzer from the then all-male Boston Marathon simply because she was a woman. Luckily for Switzer, Semple was bounced out of the race instead by her boyfriend and she went on to finish. Photo by Harry Trask for AP Images.

This year Bloomsday will continue to develop its post-race festivities in Riverfront Park, with an expanded number of activities, exhibitors, and food vendors. Tickets for a post-race lunch can be purchased during online registration or at the Bloomsday Trade Show.

For the first time ever, 2008 participants can purchase personalized Bloomsday souvenir gear from VictoryStore.com. This means they can individualize apparel with a name, company, number of Bloomsdays run, and other information. They can also purchase apparel that allows them to dedicate Bloomsday to a loved one, with a percentage of each purchase going to Bloomsday's official charity, Cancer Patient Care. Details are available by clicking the “Bloomsday Gear” button on Bloomsday’s web site.

This year Bloomsday is pleased to be supporting the efforts of Cancer Patient Care as its official charity, and entrants are encouraged to do the same—when they sign up online, through the purchase of a gold singlet to dedicate to a loved one, or in a donation directly to Cancer Patient Care. Donations will help provide social service support to cancer patients and their families in our region who have limited financial resources.

For those farther back in the pack, on-course entertainment and the cheers of spectators should help make the 7-1/2-mile journey fun and memorable. During its thirty-two years on the Spokane scene, Bloomsday has become a favored spring gathering place for families and friends, most of whom complete the course and collect the coveted finisher’s shirt, the color and design of which are kept secret until the finish line.

Online registration for Bloomsday ’08 is open at www.bloomsdayrun.org, and printed entry brochures will soon be available at locations throughout the Inland Northwest. The on-time entry fee for Bloomsday is $15.00 this year, one of the lowest in the nation for a major running event. Mailed entries must be postmarked by April 15 to avoid the late entry fee of $30.00. In addition, two local Sports Authority stores will be taking entry forms from now until the entry deadline of April 15.