Spokane, WA—Online registration has been brisk, printed entry brochures will soon be available at hundreds of locations in the Inland Northwest, Corporate Cup registration is nearly full, and a record number of elementary schools have begun their Fit For Bloomsday…Fit For Life training programs, so it’s clear that health and fitness are thriving in the Inland Northwest as the Lilac Bloomsday Run enters its fourth decade. Changes implemented in last year’s 30th running of the Lilac Bloomsday Run are now firmly in place, and this year Bloomsday will make another major change, as race Check-In and the Trade Show combine in Spokane’s new convention facility.

“Last year we absorbed more change than we have in Bloomsday’s thirty-year history,” said new Lilac Bloomsday Association President Jon Neill. “We implemented computer chip timing, consolidated all our starting groups onto one street, and moved our finish line to a spectacular site above the falls. This year we have another big change in store as we combine our Check-In and Trade Show into one big room at the new convention center.” 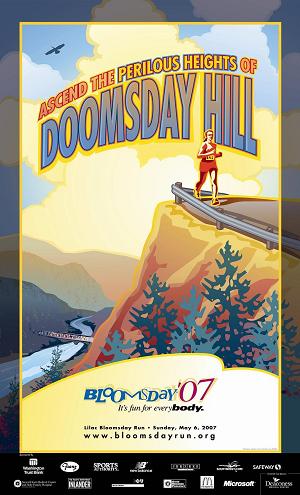 Check-In and the Trade Show, which have previously been spread between the Ag Trade Center and the Convention Center, will be combined this year in the Group Health Exhibit Halls, a move that organizers believe will enhance the excitement of one of the nation’s largest health and fitness expos. Among the activities planned at this year’s show will be a presentation by 1972 Olympian and former Sports Illustrated writer Kenny Moore, who will speak at the Trade Show on Saturday, May 5, and will be available to sign his new book, Bowerman and the Men of Oregon.

Along with incorporating last year’s changes in start, finish and timing, Bloomsday continues with another innovation from last year, the Marmot March. Open to kids grade one and younger and their parents, the Marmot March will be a non-competitive 1.2-mile tour of Riverfront Park on the day before Bloomsday. The Marmot March is sponsored by Franz Family Bakeries and is open for the first 300 children who sign up.

For those farther back in the pack, on-course entertainment and the cheers of spectators should help make the 7-1/2-mile journey fun and memorable. During its thirty years on the Spokane scene, Bloomsday has become a favored spring gathering place for families and friends, most of whom complete the course and collect the coveted finisher’s shirt, the color and design of which are kept secret until the finish line.

Bloomsday isn’t just for adults either. Every year nearly 10,000 entrants age 18 or younger complete the course, and this year nearly 6,000 elementary school children have begun taking their first steps of the spring as part of the Fit for Bloomsday...Fit for Life training program, now in its twenty-second year. A record 85 elementary schools have signed up for the program, which is sponsored by Subway and Riverfront Park.

For the second year, Bloomsday has designated the Vanessa Behan Crisis Nursery as its official charity. Entrants are encouraged to make a donation when they sign up, and companies will be able to sponsor Bloomsday-themed metal sculptures by artist “Blowtorch Annie,” which will be displayed around town in the weeks leading up to race weekend. All proceeds from sponsorship of the sculptures will benefit the nursery.

Online registration for Bloomsday ’07 is open at www.bloomsdayrun.org, and printed entry brochures will soon be available at locations throughout the Inland Northwest. The on-time entry fee for Bloomsday is $14.00 again this year, one of the lowest in the nation for a major running event. Mailed entries must be postmarked by April 17 to avoid the late entry fee of $30.00. In addition, The Sports Authority will be taking entry forms at their two local stores from now until the entry deadline of April 17.