Philip Langat Leads a Kenyan Sweep in the Men's Race

Spokane, Washington—The anticipated sprint finish never materialized in the fortieth annual Lilac Bloomsday Run, the fifth stop on the PRRO Circuit of major US road races, but that didn't stop Cynthia Limo from racing like someone was in hot pursuit. The Kenyan star broke free from the rest of the field by halfway on the 12-kilometer course, then continued to put pedal to the metal all the way to the finish, in the process setting a new course record of 38:03. Meanwhile, while there was no course record in the men's race, Philip Langat did a similar number to the competition as he managed a slight lead by the top of Doomsday Hill, then built his lead from there to the finish, winning by a comfortable 12 seconds over fellow Kenyan Isaac Mwangi.

The field of 46,566 who signed up for this year's Bloomsday were treated to a second year of ideal weather, with brilliant blue skies, no wind, and temperatures at the start in the mid-40s. A pack of 11 women took advantage of the conditions by racing together for the first half mile. By the bottom of the first downhill at 1-1/2 miles, though, that pack had dwindled to eight, with three-time Bloomsday champion Lineth Chepkurui in the lead.

Then, as that pack headed up Hangman Hill near the two mile mark, Limo began her charge, whittling the lead pack to four. By three miles only Chepkurui and American Aliphine Tuliamot-Bolton of Santa Fe, New Mexico were close. A half-mile later Limo made her break, then quickly built on her margin. By the finish, she was a stunning 1:39 ahead of Tuliamot-Bolton, and nearly two minutes ahead of Jane Kibii, who passed Chepkurui to take third. Limo's time of 38:03 eclipsed Chepkurui's mark of 38:10 from 2010. 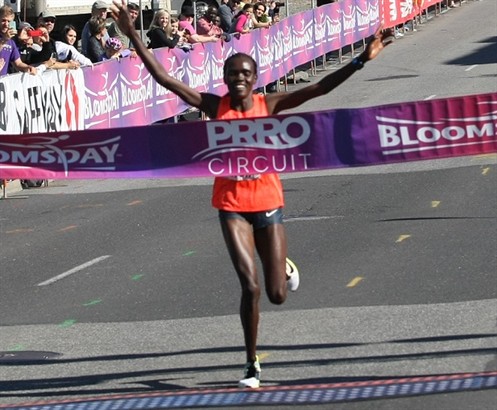 "I'm very excited for the race, and more so to break the record," said Limo."It's amazing, and I thank God for it."

In the men's race, a solid pack stayed together through a quick first mile in 4:26, then added a 4:24 in the second, with Kenyans Philemon Cheboi, MacDonard Ondara and Eluid Ngetich in the lead. Langat, meanwhile, cruised farther back but within striking distance. At mile three, Isaac Mwangi surged up a short hill, which dropped Ngetich from the group. The surge was short-lived, though, as Mwangi grabbed his side, suffering from what appeared to be a side stitch. At mile 4, Mwangi gave up the lead and tucked into fourth position behind Cheboi, Langat and Ondara. 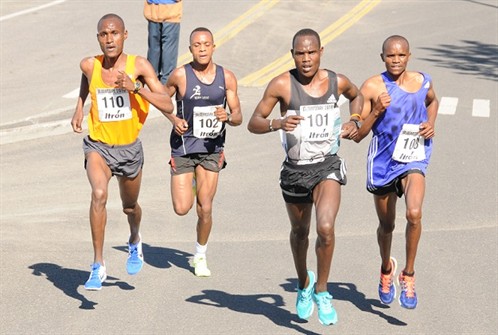 Lead pack at the base of Doomsday--(left to right) Ondara, Mwangi, Langat and Cheboi.

As in so many Bloomsdays, Doomsday Hill was where the pack disintegrated. Langat, who had patiently matched the surges of Ngetich, Cheboi and Mwangi earlier in the race, made his move as the group started the climb. By the top of the hill at mile 5 he had a slight lead over Cheboi, with Ondara and Mwangi 20 meters behind. That was the final break, as Langat continued to push the pace over the final 2-1/2 miles, finishing in a respectable 34:26. Mwangi held on for second (34:38), with Cheboi (34:42), Ondara (35:02), and Ngetich (35:28) rounding out the top five. American Patrick Smyth came in thirteen seconds later to take sixth.

"Last year I was here and I finished fourth," said Langat. "But today I win, so I am happy."

Limo and Langat each earned $7,000 for their wins, part of a purse of nearly $100,000 in all divisions of the race. Along with the prize money, both earned the right to compete for the PRRO Super Bonus of $10,000 at the PRRO Championship presented by Boilermaker in Utica, NY on July 10th. Patrick Smyth and Aliphine Tuliamot-Bolton each took home Bloomsday's top U.S. citizen prize of $5,000, plus open prize money. Ulit Steidl of Seattle and Blake Russell of Pacific Grove, California, each earned the top masters prize of $1,500.

A new champion was crowned in the men's wheelchair race, as James Senbeta of Savoy, Illinois established a lead by the first mile, then quickly moved away from Laurens Molina and 17-year-old Daniel Romanchuk. Senbeta rolled on to win by over a minute in his fifth try on the Bloomsday course.

Susannah Scaroni, formerly of Tekoa, Washington and now living in Urbana, Illinois, showed special toughness in earning her third Bloomsday victory. Her win came only a day after injuring her hand in the wheelchair prolog, where wheelchairs earn their positions for race day. Scaroni moved away early from Jill Moore of Savoy, Illinois and raced to a 31:45 win.

In the Quad-52 Division, Santiago Sanz pulled away from Ray Martin to notch his 12th Bloomsday championship in a row. His time of 32:47 would have placed him 5th in the open men's field. Kevin Stokes captured the Quad-51 title in 1:18:18.

Along with top competition in all Bloomsday divisions, finishers enjoyed performances from nearly 40 bands, vocalists, performing troupes and radio stations along the course, eventually reaching the finish and claiming this year’s finisher T-shirt. Next year’s Lilac Bloomsday Run, the 41st, will be on Sunday, May 7th, 2017.