Spokane, WA—John Korir unleashed a scorching sprint on the downhill homestretch to finally shake two pesky challengers—fellow Kenyan Julius Kibet and Tanzanian John Yuda—and notch his third victory in the Lilac Bloomsday Run, while Edna Kiplagat managed to break away at the six-mile point from another pesky competitor, Teyba Erkesso of Ethiopia, to capture her first Bloomsday victory in two tries.

It was a calm, cool and sunny morning for the 31st running of the Lilac Bloomsday Run. Kenyan Hillary Kimaiyo jumped out to an early lead in the men’s race, with one of the deepest fields in Bloomsday history close on his heels. By mile three twelve runners were still in the lead pack, but as the group passed mile four and dropped down to the Meenach Bridge the pack began to thin, and at the base of “Doomsday Hill” there were six runners left in the hunt.

By the top of the hill Korir, Cosmas Koech and Macdonald Ondara were in front, but Kibet and Yuda weren’t far behind. As the pack reached mile six, Korir, Kibet and Yuda had worked their way into the lead, and it would be a three-man battle from there to the end. As the trio turned the final corner and headed to the finish, they all sprinted furiously, but it was Korir who managed to gain the final edge, as he raced to a 34:18 victory, one second ahead of Yuda and another in front of Kibet. 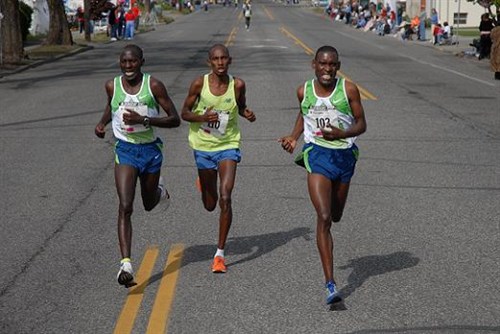 In the women’s race, Kiplagat and Erkesso made it a two-woman race early on, as they broke from the field just after the two-mile mark, running side by side over most of the next four miles. A half-mile after reaching the top of Doomsday Hill, though, Kiplagat threw in an impressive surge that gave her a clear lead by the six-mile point. She continued to build on that margin to the finish, clocking 38:52, a full thirty seconds ahead of Erkesso. Those two were followed by Kenyans Emily Chebet and Catherine Ndereba, with Kathy Butler of Great Britain in fifth. 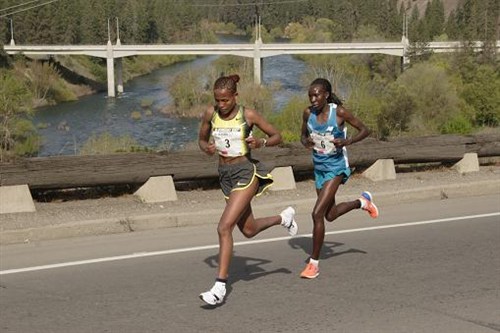 Erkesso leads Kiplagat as the two near the top of Doomsday Hill. (Lisa Stonecipher photo)

In Masters competition, Mbarak Hussein’s 36:06 winning time was the fastest in Bloomsday history, eclipsing Simon Karori’s 36:14 from 2000. Lucy Smith of Canada was the fastest of the female Masters with a 41:59 clocking.

This year’s Bloomsday Wheelchair Division was the largest in 10 years, had the biggest women’s field in Bloomsday history, had the closest Men’s Open division finish in 13 years, saw one course record and, for the first time in road racing history, featured team competition between university-level athletes.

In the men’s wheelchair race a lead pack of three—Aaron Gordian, Krige Schabort and Saul Mendoza—stayed tight for 4 ½ miles, when Schabort broke out for a 50-yard lead. Climbing Doomsday Hill Mendoza reeled Schabort in, and those two were side by side at the top, with Gordian dropping off the pace. At 5 ½ miles Mendoza passed Schabort and they stayed in that order, close enough for trash talk, all the way to the finish. Schabort put on a powerful sprint 200 yards out, but Mendozawas able to hold him off for his 10th consecutive victory here in 27:06. 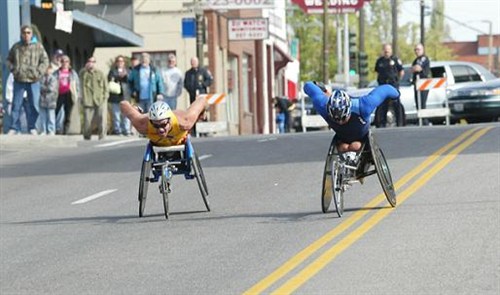 Schabort and Mendoza neck-and-neck on the final downhill sprint to the finish. (Dennis Merritt photo)

“I’m happy to be in first place,” said Mendoza, “Because each time here it’s harder and harder.”

In the women’s wheelchair race rookie Amanda McGrory from the University of Illinois followed two-time Bloomsday winner Shirley Reilly of the University of Arizona through the initial flat section, down the first hill and up the first climb before taking the lead as they went up Cemetery Hill at mile three. She never looked back and, by the time she finished, McGrory’s 32:43 was good enough for a separation of more than three minutes over Reilly.

In the Master’s race the top three wheelchairs finished within two seconds, with Scott Parson winning in 34:17 and Simon Harrington and Ramiro Bermudez posting identical times of 34:18. Finish line spotters estimated that Harrington’s margin of victory was six inches.

In the Quad Division, Spaniard Santiago Sanz-Quinto set his third consecutive course record with a 32:44 victory, followed by Clayton Gerein, Steven Toyoji and Ian Rice. And in a new team competition format that included two males, two females and one T-2 Quad competitor, the University of Illinois beat the University of Arizona, winning the right to display the “Bloomsday Collegiate Challenge” trophy on their campus for a year.

There were over 40,323 finishers in this year’s Bloomsday Run, and nearly 30 bands, vocalists and performing troupes along the course to keep the throng of runners, joggers and walkers entertained. Next year’s Bloomsday, the 32nd, will be on Sunday, May 4th, 2008.